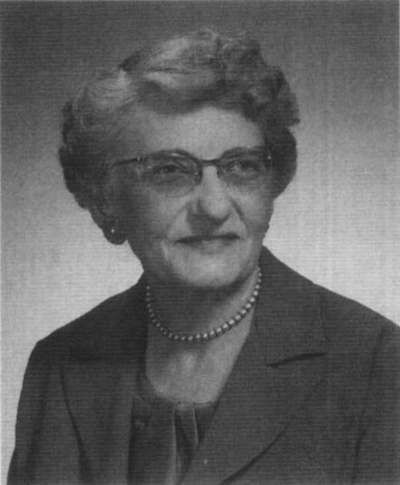 LeVelle Wood was born in Corvallis in 1900 and grew up on a farm in Tangent, a small town just east of Corvallis. Her family moved to Corvallis when she was in junior high in order to be closer to Oregon Agricultural College. Wood’s father was an OAC alumnus, so she knew from an early age that she would attend the school. She graduated in 1921, majoring in home economics education. She then received her teaching certification and spent the next few years working as a high school teacher at various schools in Oregon.

From there, Wood went to New York City to complete her master’s degree at the Teacher’s College and was subsequently hired by the Department of Institutional Management at Kansas State University. During her fifteen years working at KSU, Wood and several colleagues co-wrote the first general textbook on food service, Foodservice in Institutions, in 1938. During this period, she also traveled to Japan and China with Oregon State College’s home economics dean Ava Milam to investigate the possibility of implementing a new food services management curriculum at the YWCA school in Tokyo. After leaving Kansas State, Wood went abroad to volunteer with the American Red Cross in Morocco and Italy during World War II.

Following the conclusion of the war, Wood spent almost twenty years of her professional life at Ohio State University, working there from 1946 until her retirement in 1965. Though she was told she could not become a professor until she received a Ph.D., she ended up being given a teaching position a few years into her tenure. In 1969 Wood received the highest honor of the American Dietetic Association, the Marjorie Copher Award. She was also a member of the American Association of University Women, the American Home Economics Association, and the American Dietetic Association, and an honorary member of both Omicron Nu and Phi Nu. During her retirement years, Wood spent much of her time traveling with family and keeping herself busy with personal hobbies.

LeVelle Wood passed away in Corvallis in January 1997.