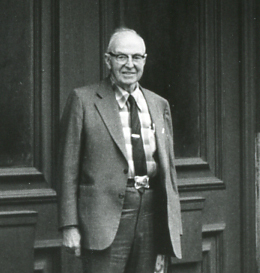 Stanley Bishoprick, Jr. was born in Skagway, Alaska to a grade school teacher, Bertha, and a prospector, Stanley Bishoprick. Stanley Sr. later gave up prospecting once he had earned enough to build his own sawmill. After relocating to British Columbia for a time, the Bishopricks eventually settled in Portland, Oregon.

Though gainfully employed in a mill from the age of thirteen, Stanley Jr. was ultimately persuaded to pursue an education. In 1927 he enrolled at Oregon Agricultural College, where he studied Forestry, a field with which he was already familiar due to his previous work experience. After graduating in 1934, Bishoprick accepted a position at the Dant and Russell Lumber Company, where he worked as a consultant. In 1936, he was sent to Shanghai to represent the company, and he remained in China until 1941, when he returned stateside as the newly appointed vice president of Dant and Russell.

Bishoprick subsequently married and established his family in Vancouver, Washington. Stanley and Cora Bishoprick couple raised four children, one of whom - Jolene Unsoeld - would eventually become a congresswoman representing the state of Washington.