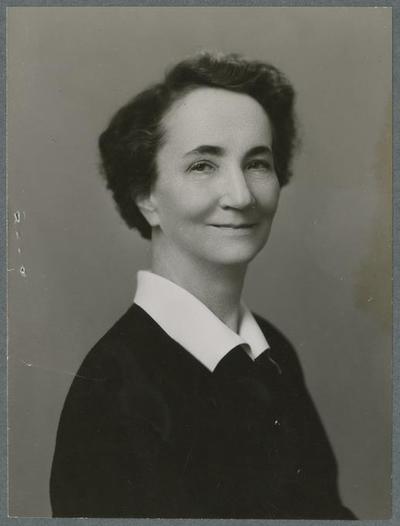 Helen Margaret Gilkey was born in 1886 in Montesano, Washington. She moved with her family to Corvallis in 1903. She received her bachelor's degree in Household Science from Oregon Agricultural College in 1907 and her master's degree in Botany in 1911. Gilkey earned her PhD at the University of California Berkeley in 1915. After completing her doctoral work, she worked as a scientific illustrator at Berkeley until accepting a position as curator of the Herbarium and professor in the Botany Department at OAC in 1918.

Gilkey remained at her alma mater until her retirement in 1951. During this time, she established herself as a leading authority on mycology with a particular emphasis on truffles (order Tuberales). Gilkey coauthored several books; produced more than 40 scientific publications; generated educational content for popular audiences; and was recognized for the quality of her scientific illustrations, which she created both for her own publications and those of other scientists and researchers. She also oversaw the development and growth of the Herbarium, including the production of an unpublished history of the collection. She passed away in 1972.

Beulah Gustavia Gilkey earned a BS degree in Domestic Science and Arts from OAC in 1910. She worked as an assistant in the OAC Registrar's Office form 1910 until 1917, when she returned to school at OAC to prepare for teaching. She earned a second BS degree in Home Economics 1918. She taught school in Corvallis and Portland and worked again at Oregon State College as a clerical assistant in the summers of 1943 and 1944. Beulah Gilkey was born in Washington in 1890 and her family moved to Corvallis in 1903. She died in 1977 in Corvallis. Her older sister was Helen Gilkey.

In this recording, the Gilkey sisters are interviewed by Betty Lynd Thompson. A dance professor, Thompson came to Oregon State College in 1927 to teach in the Department of Physical Education for Women. Until 1945, she taught all dance classes -- modern, folk, square, tap, and ballroom -- as well as basic rhythm and movement. As other dance faculty were added to the department, she was able to concentrate on her major interest of creative dance. She wrote a college textbook for dance instruction, Fundamentals of Rhythm and Dance, which was published in 1933. In 1931, she founded the Oregon State chapter of Orchesis, the modern dance honorary. She retired from OSU in 1972 and passed away in 1985.

This recording also contains comments made in 1984 by Harriet Forest Moore. Moore trained as a physical therapist at Reed College and worked as a physical therapist in the U.S. Army Reconstruction Aid Program before enrolling at Oregon Agricultural College in 1920. She completed B.S. (1922) and M.S. (1924) degrees in vocational education at OAC. In 1955, Moore became a Library Assistant in the Oregon State College Library. Her attention to detail and experience with local history research led to her appointment as Archivist in 1961. After her retirement in 1966, she worked part-time on special projects in the Archives until 1970. She died in 1992.