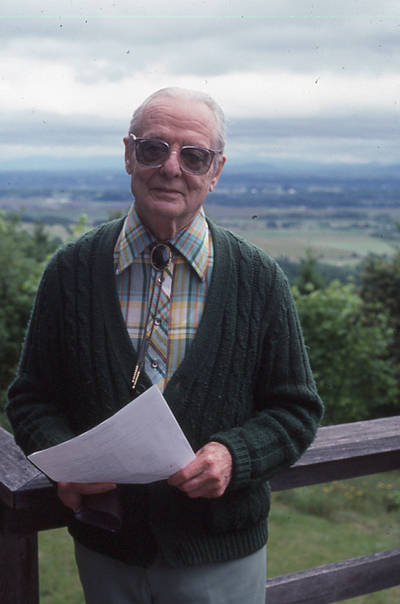 Louis Crawford Raymond was born in Vancouver, Washington in 1906, after which point his family promptly moved to Astoria, Oregon, where his father established a wholesale business.

Interested in geology and mining as a teen, Raymond chose to pursue collegiate studies at Oregon Agricultural College, during which time he drew a geological map of Oregon that was used in textbooks for quite some time. Graduating in 1930 with a degree in mining engineering, Raymond later completed master's work in geology at the Massachusetts Institute of Technology.

His graduate studies completed, Raymond returned to Corvallis briefly as a teaching assistant, and found his future bride - Louvera Horn - amidst his students. Over the course of their lives together, Raymond engaged in a long and varied career in the fields of mining and geology. At various points he worked as an assistant superintendent at the Mountain Copper Company, and as a mining specialist for the Federal Trade Commission in Washington D.C. He also enjoyed painting and much of his work was deposited with OSU's Horner Museum.

Raymond retired in 1973, at which point he and his wife moved to New York. In his later years, Raymond remained active in his community as a member of the New Castle Historical Society and the Resurrection Lutheran Community Church.