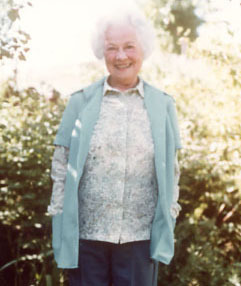 Ethel Elaine "Peggy" (Walker) Allworth was born on January 2, 1897, in Hanford, California, the second of Elias and Effie Walker's six children. Her family moved to Corvallis, Oregon when she was twelve years old, and lived on a farm near the Marys River. As a girl, Allworth and her father visited San Francisco in the summer of 1906, just months after the catastrophic earthquake, to provide aid to the devastated city's refugees.

Allworth met her future husband, Edward Allworth, during her senior year of high school. She began attending Oregon Agricultural College in 1915 because of the college's close proximity to her family home in Philomath. At OAC, she majored in dietetics, minored in pre-nursing, and took many classes in Home Economics offered by Dean Ava B. Milam. During her undergraduate years, she was also a member of the Gamma Phi sorority, swam competitively, and participated in dance pageants.

Peggy graduated from Oregon Agricultural College in the spring of 1919 with a bachelor's degree in Home Economics and married that summer, shortly after Edward had returned from fighting in World War I. The couple raised four children together - Edward, Joan, Kent, and Nancy - all of whom graduated from Oregon State College. Peggy utilized her degree in Home Economics to manage her home, caring for her extended family as well as her own children.

Edward graduated from Oregon Agricultural College in 1916 with a degree in Commerce, and enlisted in the United States Army, 60th Infantry Regiment, 5th Division. He received a Congressional Medal of Honor for his bravery in action seen at Clery-le-Petit, France, in November 1918. He retired from the military in 1922 due to war injuries, and later became secretary of the Alumni Association at OAC. He was later hired to raise funds to support the building of the Memorial Union, and he subsequently became director of the MU, a position that he held for thirty-eight years.