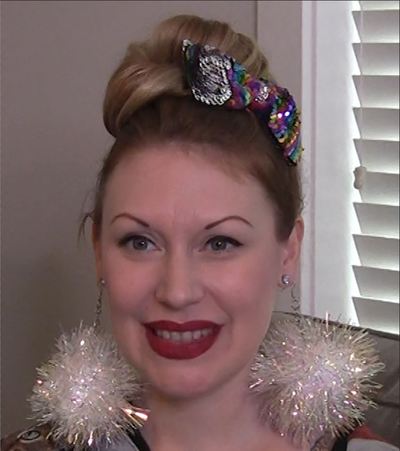 Tana the Tattooed Lady was born in Amarillo, Texas, and attended a magnet school for gifted and talented students, which fed into a high school for the performing and visual arts. She was always very involved with the theatre arts and dance communities, and started working as a go-go dancer. While attending college at Chico State University she was instrumental in creating the musical theater degree, writing curriculum and helping shape that program. She was very inspired by the starlets and pin ups of old Hollywood, and by the “Something Weird” videos that showed old footage of Burlesque entertainers from the 1950s and 60s. She began to study and incorporate that Burlesque dance vocabulary into her choreography.

Tana was later recruited by Burlesque performer and designer Jamie Von Stratton and was hired as a member of the Atomic Bombshells Burlesque troupe in Seattle around 2004 or 2005. With the Atomic Bombshells, she traveled to perform at the New York Burlesque Festival and went on to perform a summer at The Vixen in Provincetown and, later, with the band, El Vez, traveling to Spain. One booking led to another and soon she had a career.

Tana moved from Seattle to Portland in 2007, when there wasn’t much of a Burlesque scene in Portland yet. Seeking to fill this void, Tana started producing Burlesque and variety shows. Dancing in strip clubs and also in the Burlesque community, Tana worked to break down the stigma and barriers regarding stripping. She incorporated the glamorous costumes of the old-style Burlesque into her club stripping routines, and also taught at the Rose City School of Burlesque.