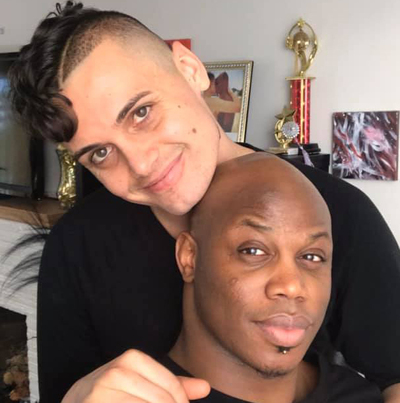 IZOHNNY is the Burlesque performing and producing duo of Isaiah Esquire and Johnny Nuriel. Based in Portland, Oregon, IZOHNNY performs together and separately, nationally and internationally. Esquire is a native of Portland, while Nuriel grew up in Santa Cruz, California and moved to Portland to attend college in 2007.

Both give credit to dancing, singing, and theatre in school for their early introduction to the performing arts. Esquire started singing and dancing as a child, creating dances and shows in his neighborhood, studying dance throughout his adolescence, and later working with pre-professional dance companies in Portland. Meanwhile, Nuriel discovered belly dance and explored the theatre in high school and vocal training in college.

In 2007, Esquire helped found the all-male Portland Burlesque Troupe, Burlesquire,  and in 2012, Nuriel began performing as an aerialist performer at Sky Club, a queer-positive, creative performance space and club in Portland. In 2013, Esquire and his former co-producer started a variety show, BOYeurism, which included many performance styles, including singing and aerial work. Nuriel performed in that show and the two started working more closely together. Subsequently, they have been romantically involved for seven years and are married. They continue to be a two-man production company.