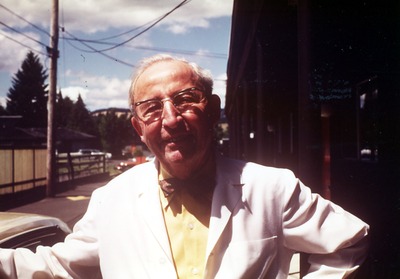 Waldo Ball posing outside of his medical office, Corvallis, Oregon, 1979.

Dr. Waldo Whitney Ball was born in Cambridge, Nebraska near the main line of the Burlington Railroad, where his father worked as a train dispatcher. The oldest of six boys, Ball knew from an early age that he wanted to be a doctor. His mother, a graduate of Drake University who came to Nebraska to teach, decided that the family needed to move to an area with university access. The Ball family subsequently relocated to Corvallis in 1911. A year later, in 1912, Waldo's father William opened Ball Studios, a photography studio, which to this day is still run by descendants of the Ball family.

Eschewing the family business, Waldo Ball studied and graduated from the University of Oregon Medical School in 1923. In 1924, he began his long career in medicine when he opened his initial practice in Clatskanie, Oregon. Twelve years later, he relocated back to Corvallis, where he opened the Ball Clinic in the Ball Building on Third Street. For many Corvallis families, Dr. Ball provided care for mothers, fathers and children alike.

Ball was also the physician for many of Oregon State University’s athletic teams. When time permitted, he attended team practices and away games. Additionally, Ball served as the district surgeon for the Southwest Pacific Railroad, and provided medical care on service trips to Tunisia and Sri Lanka. After sixty-three years as a doctor, Ball retired at the age of 90. At the time, he was the oldest practicing doctor in the state of Oregon.