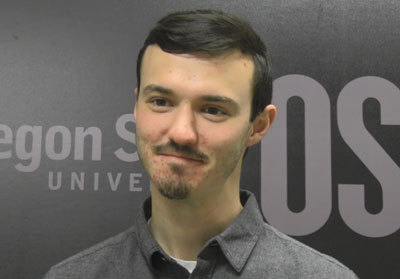 Jason Hanauska was born in Salem, Oregon in 1989 and grew up recreating on the Oregon coast and Cascade Mountains. He played sports as a child, and was put on a motorcycle at the age of four. His mother is a nurse and his father works in IT. Hanauska started playing the trumpet in fifth grade, reluctantly at first and then with enthusiasm and commitment as a member of a drum corps. The rigorous practices and national competitions influenced his school work ethic and provided him with an important community for several years.

After high school, Hanauska worked in the service industry before attending Chemeketa Community College. While initially considering studying music, he was inspired by engaging instructors and an environmental science course to pursue environmental engineering. During his studies at CCC, Hanauska’s son was born. He became more focused on his long-term goals, while also grappling with the financial and time management pressures of being a young parent and student.

In 2015, Hanauska transferred to Oregon State University to study environmental engineering in the Chemical, Biological, and Environmental Engineering Department. As an undergraduate student, he has been an active member of Engineers Without Borders. He participates in a program that aims to expand drinking water to a community in O’rana, Cambodia, and recently traveled there on an assessment trip to gather data and to better understand the community’s needs. Hanauska is interested in maintaining involvement with EWB as a professional engineer. As he nears graduation, he plans to implement his knowledge of water treatment and modeling in a professional environment.