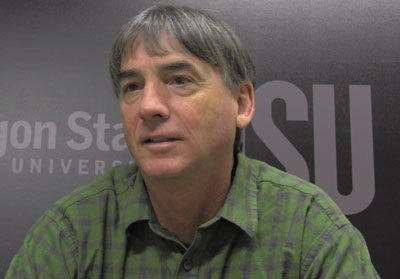 Peter Clark was born in Connecticut in 1956 and moved with his family to California when he was six. His parents were both schoolteachers. Growing up near Carpinteria, California provided Clark with opportunities to recreate outdoors. After high school he went to St. Lawrence University, an institution his family had historical ties to. While he initially studied English, an introductory geology course recommended by friends inspired Clark to pursue geology. After completing his bachelor’s degree, Clark researched the glacial history of the St. Lawrence Valley as a master’s student at the University of Waterloo in Ontario, Canada. Interested in taking his academic interests further, he then went on to research the glacial history of the Torngat Mountains on the Labrador Peninsula at the University of Colorado Boulder. Clark worked with Institute of Arctic and Alpine Research group, an organization he had discovered as undergraduate reading geology journals. Prior to completing his PhD in 1984, Clark began working as an assistant professor with the University of Illinois at Chicago. At UIC, he discovered how much he enjoyed his role as a teacher.

In 1988, Clark applied for an assistant professor position in the Department of Geology at Oregon State University. At OSU, he has continued to research glacial history and ice sheets, as well as paleoclimatology, sea level rise, and abrupt climate change. Synthesizing his field work with bigger picture questions has led to collaboration with scientists and climate change modelers around the world. Climate change has always been relevant to his research, and as the evidence and impacts of global warming have increased over time, his research on the geologic past has figured more prominently into predictions of the future. Clark was a co-author on the “Sea Level Change” chapter of the Fifth Intergovernmental Panel on Climate Change. He has also been involved with the U.S. Climate Change Science Program as an author of a report on abrupt climate change.

Clark continues to teach a range of courses at OSU and was honored as a Distinguished Professor in 2016.