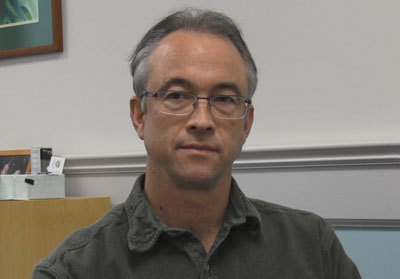 Philip Mote was born in Colorado in 1965, and grew up in Utah and California. His mother was a writer and his father was a Presbyterian minister. Family vacations were spent camping, and Mote recreated outdoors as a cross-country runner and cyclist. An opportunity to attend Harvard College as an undergraduate student moved Mote to the east coast. While his academic focus was on physics, an undergraduate research fellowship exposed Mote to oceanography and solidified his interest in atmospheric science. After graduating, he returned to the west coast to teach high school for two years, before attending the University of Washington as a PhD student.

The upwelling of media coverage and research on ozone depletion and global warming in the late 1980’s inspired Mote’s research interests in anthropogenic climate change. As a PhD student and post-doc with the University of Edinburgh in Scotland, Mote worked on water vapor models in the stratosphere. He returned to Seattle with his family in 1996 as a research scientist with the Northwest Research Associates. This led to a position with the Climate Impacts Group at the University of Washington. His new role encompassed public outreach, and Mote travelled throughout the Pacific Northwest to educate a variety of audiences on climate science. During this period, his research interests shifted from global climate modeling to regional trends, and expanded into other fields via interdisciplinary collaboration.

In 2009, an opportunity to lead the Oregon Climate Change Research Institute brought Mote and his family to Corvallis, Oregon. As director of OCCRI, Mote continues to collaborate with scientists and academics from a variety of disciplines and Oregon universities. He also continues to communicate climate science to the public and to policy makers. While based at Oregon State University, Mote has taken on the role of Associate Dean at the College of Earth, Ocean, and Atmospheric Sciences.