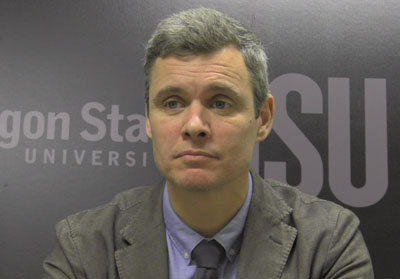 Allen Thompson was born in Chicago, Illinois in 1969 and grew up in a nearby suburb. His father was a corporate attorney and his mother was primarily a homemaker. Thompson’s relationship to nature developed through a variety of outdoor experiences, from family camping trips along the Appalachian Trail to exploring the forested parts of his neighborhood near Lake Michigan. His academic performance wavered in high school, as Thompson instead sought out adult evening classes in a variety of philosophical subjects at Lake Forest College. While he was conditionally accepted to Evergreen State College in Olympia, Washington, once Thompson began his studies, he found the alternative academic structure to be a good environment for exploring his interests in philosophy further. After graduating from Evergreen, he studied meta-ethical theory through the master’s and PhD programs at the University of Washington in Seattle.  As a graduate student, Thompson taught philosophy courses, including the program’s inaugural course on environmental ethics.

In 1999, Thompson left his PhD program to go live on a cooperative property he had purchased with friends near Durango, Colorado. The remote property was farmed and intended to be used as a tool to teach local schoolchildren about gardening, ecology, and environmental ethics. However, the lack of available funds and needs of his growing family influenced Thompson to return to academia to complete his PhD and to teach philosophy. He taught at Fort Lewis College and Virginia Commonwealth University before acquiring a tenure-track position in environmental ethics at Clemson University in South Carolina. An opening in the School of History, Philosophy, and Religion at Oregon State University in 2011 brought Thompson back to the Pacific Northwest.

Within the field of environmental philosophy, Thompson has explored a variety of topics related to climate change. He has written about moral responsibility and global warming, addressing the complexity of assigning responsibility and attributing social cost. He has also explored how current virtues and ecological perspectives associated environmentalists could adapt with the changing global ecology. Thompson collaborates with researchers across a variety of disciplines at OSU, and internationally as a Rachel Carson Fellowship alumnus.