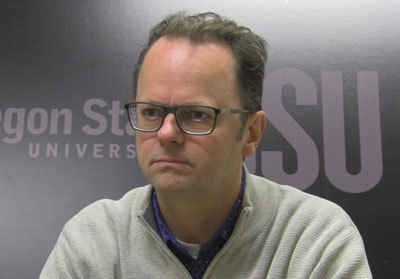 Andreas Schmittner was born in a small German village in 1966, and aside from a temporary family move to Tehran, Iran, spent his childhood there. His mother stayed at home and his father worked for a German telephone company. Schmittner was the first in his family to attend university and while he initially planned to study music, he decided to pursue physics at the University of Bremmen after serving as a civil servant for two years. As an undergraduate student, he was first exposed to the earth sciences through a sea ice modeling project at the Alfred Wegner Institute. He returned to AWI after graduation and completed a research thesis in Arctic atmospheric processes before continuing on to the University of Bern in Switzerland for a PhD in physics. His research on modeling atmospheric water transport and ocean circulation incorporated anthropogenic climate change.

Following his PhD, Schmittner went to the University of Victoria in British Columbia, Canada, as a post-doctoral researcher. He was given a wide range of research freedom and worked on an ocean circulation model of increasing complexity. After this position, he returned to Germany for a post-doctoral position at the Max-Planck Institute for Biogeochemistry. His research expanded to include paleoclimatology and he continued to improve upon his ocean-climate model as it grew to encompass ecosystem information. He completed an additional post-doctoral position with the University of Kiel before acquiring a faculty position at Oregon State University.

As a professor in the College of Earth, Ocean, and Atmospheric Sciences, Schmittner teaches coursework in climate change to students from a variety of disciplines. He recently published an open source textbook, Introduction to Climate Science, in an effort to make the content free to students and widely available to members of the public. He continues to analyze ocean circulation and global climate, considering at a variety of factors from heat transfer to biogeochemical processes to greenhouse gas emissions. Schmittner also maintains an active public voice in his efforts to educate the general public on climate change.