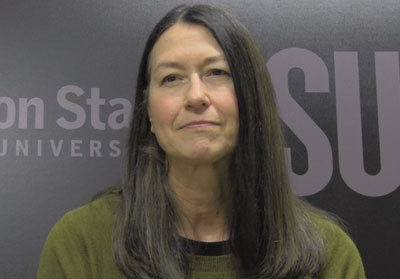 Beverly Law was born in 1955 in St. Paul, Minnesota and grew up next to a lake and forest in the area. Her father was a manager and her mother taught art. As a child, Law spent much of her time outdoors and learned about forest cycles from her grandfather. Her interests in forests and in wanting to work outdoors influenced her decision to study forest management at the University of Florida. Law assisted on a number of research projects as she worked her way through school. After completing her bachelor’s degree, she worked for AT&T and as a researcher in the southeast before moving to Corvallis, Oregon in 1988 for a forest ecologist position with the Environmental Protection Agency. While at the EPA, Law helped to develop the US Forest Service Forest Health Monitoring program (still in use today), and she met her future graduate school advisor, Dick Waring. She eventually returned to academia to pursue a PhD in Forest Science at Oregon State University. Her research on net primary production of vegetation across Oregon was funded by the National Aeronautics and Space Administration.

Following her PhD, Law decided to stay in academia and work as a post-doctoral researcher with the College of Oceanic and Atmospheric Sciences. She continued to research vegetation-atmosphere interaction, using both field observations and remote sensing tools. Ultimately she returned to the College of Forestry as a professor and director of TERRA-PNW, a research group that incorporates a variety of methods to monitor changes in landscapes across the Pacific Northwest. Law has been at the forefront of micrometeorology technology and in developing national and international atmospheric monitoring networks, such as the AmeriFlux program. Climate change has remained an important component of her research and she has collaborated with researchers at OSU as a part of the Center for Analysis of Environmental Change and the Oregon Climate Research Institute.

In addition to being a prolific researcher, Law has been proactive in communicating science to policymakers. She is on the Oregon Global Warming Commission, and has testified before US House and Senate committees on climate change and greenhouse gases. She has also worked with the Intergovernmental Panel on Climate Change as an expert advisor on forest disturbance. Law continues to teach and research at OSU.