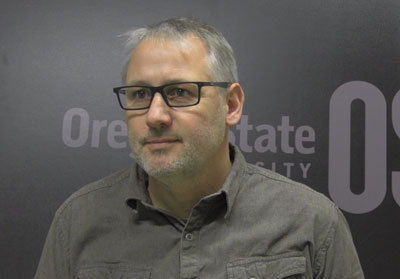 Peter Ruggiero was born in New York City in 1969 and grew up in Connecticut and Massachusetts. His mother was a schoolteacher and his father worked for AT&T. Ruggiero’s family spent a lot of time outdoors, especially at the beach and sailing. His interests in the ocean surfaced as an undergraduate student at Lehigh University, where Ruggiero studied civil engineering. A coastal engineering course exposed him to new career opportunities, and inspired him to pursue graduate school at Oregon State University. Initially only interested in a master’s degree, research in the Coastal Ocean Engineering program and the College of Oceanography inspired Ruggiero to complete a PhD on erosion and flooding hazards on the Oregon coast.

Following his PhD, Ruggiero left academia to work for the Washington Department of Ecology as a researcher. He developed a beach monitoring program (still in use today) and investigated coastal geomorphology around the mouth of the Columbia River. Ruggiero left Washington for a two-year USGS Mendenhall Research Fellowship in San Francisco, California, and continued working for the agency as a permanent employee. While at USGS, Ruggiero collaborated with coastal researchers around the country and assisted in collecting data in Sumatra following the 2004 tsunami.

A family decision to move to Corvallis, Oregon in 2006 drew Ruggiero back to academia. He returned to OSU as a professor in the Department of Geosciences (now a part of the College of Earth, Ocean, and Atmospheric Sciences). Ruggiero continues to research coastal geomorphology and coastal hazards, incorporating the impacts of climate change, at OSU. He has collaborated on interdisciplinary projects assisting coastal communities in the Pacific Northwest initiate adaptation strategies. In addition to researching, Ruggiero teaches both undergraduate and graduate level coursework.