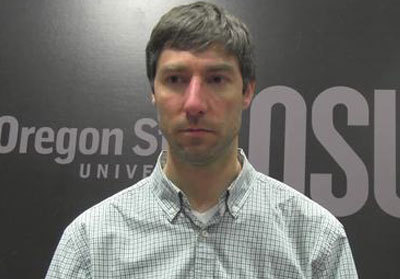 Brandon Trelstad was born in Salem, Oregon in 1979 and grew up in the surrounding area. As a child, he spent time recreating on his family’s rural property and neighboring public farmland. While unsure of his academic path as a high school student, Trelstad became more academically engaged after arriving at Oregon State University as an undergraduate student. His interests in natural resources and environmental policy led him to major in environmental science and minor in political science. A pivotal internship his senior year segued into a position with OSU’s Government Relations Office after school. While there, Trelstad was able to develop a better understanding of his career goals, as well as form a brand new position in sustainability at OSU.

As OSU’s Sustainability Officer since 2005, Trelstad has led efforts to improve OSU’s environmental and social impact on the planet. He has worked extensively on the institution’s carbon footprint, from tracking and reducing energy use to co-authoring the Climate Plan and its subsequent updates. Cultivating student engagement in sustainability on campus, as well as advising students on projects they are passionate about, is an important component of Trelstad’s position. He has helped grow the Sustainability Office from one employee to two full-time employees and several part-time student workers, with an abundance of projects to work on. Trelstad works closely with Campus Recycling, Student Sustainability Initiative, and is on the OSU Transportation Committee.

In addition to being an active OSU community member, Trelstad is an active member in the neighboring Corvallis community. He co-founded the Corvallis Sustainability Coalition in 2007, a network of local government, businesses, non-profits, and individuals collaborating on sustainability in the community. He currently serves on the city’s Climate Action and Advisory Board, and has worked with the planning and budget commissions.