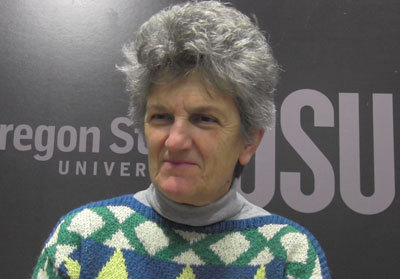 Dominique Bachelet was in born in Arras, France in 1957 and grew up in the agricultural community. Her mother worked for a telephone company and her father was a Citroën mechanic. Her interests in science began as child and compelled her to study Life Sciences at Université des Sciences et Techniques, Lille I after secondary school. Upon completing her undergraduate degree, Bachelet went to graduate school to gain research experience in plant biology. She worked with an advisor at Université de Paris XI, Centre d'Orsay in the southern suburbs of Paris. In response to Bachelet's interest in developing a computer model for her project, her adviser recommended that she complete a PhD in the US.

Bachelet arrived at West Virginia University in August of 1979, but was recruited by a professor working on computer simulations to accompany him to Colorado State University within the year. Once at CSU, she began research on plant-animal interactions and biogeochemical processes in the Pawnhee National Grasslands. As a part of her PhD, Bachelet utilized the computer programming language of Fortran. Upon completing her PhD in botany and plant pathology, Bachelet taught computer science in Thailand for four months before returning to the US for a post-doctoral research position at University of California, Riverside. At UC Riverside, she researched the nitrogen fixation processes of mesquite trees for two years and then left for a post-doc position on desert ecosystem modeling at New Mexico State University.

An opportunity to work as a quantitative ecologist with ManTech Environmental Technology Inc. brought Bachelet to the EPA Environmental Research Laboratory in Corvallis, Oregon and to Oregon State University. The Montreal Protocol was passed shortly after her arrival and influenced a research shift to study methane emissions of rice paddies in Asia for five years. As an assistant professor with the Agricultural Engineering Department (now Biological and Ecological Engineering), Bachelet taught graduate students about the research, publication, and presentation process. From 1995 to 2000, Bachelet worked collaboratively with Ron Neilson, Chris Daly, and Jim Lenihan to develop MC1, a model that simulates potential vegetation changes due to different climate change scenarios. Later versions of this model incorporated fire disturbance. Bachelet has worked with a variety of land management agencies and trained managers on how to use vegetation models.

From 2009 to 2017, Bachelet worked for the Conservation Biology Institute, where she continued to work on climate change modeling in addition to Data Basin, a platform that compiles and makes spatial data sets available to researchers. Since the 1990’s, Bachelet has been a contributing author and reviewer for the Intergovernmental Panel on Climate Change assessment reports. She continues to research and teach at OSU.