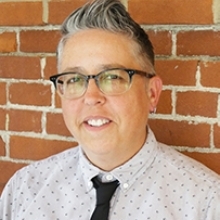 The youngest of six children, Christina Walsh was born in California and grew up in Los Angeles as well as various other locations along the East and West coasts of the United States. As a child in a working class family, college was never really an option for Walsh and was not discussed much. As a result, Walsh did not begin her higher education until she was thirty years old and enrolled at a community college in San Francisco. She later transferred into an undergraduate program in Classical and Near Eastern Archaeology at Wellesley College. She would go on to obtain her master’s and doctorate in Higher Education Administration from New York University, while also working as a Residence Hall director.

Once she finished her program of study at NYU, Walsh moved to Oregon and started working for Lane Community College in various positions that revolved around student life and engagement. In 2018, she began her current career at Oregon State University as the Student Engagement Coordinator for the College of Agricultural Sciences. In her position at OSU, Walsh has also worked in particular to promote diversity and inclusion. Notably, she advises and helped to create a chapter of Students for Cultivating Change at OSU. This group works to help provide a space for members of the LGBTQ+ community in the field of agriculture.