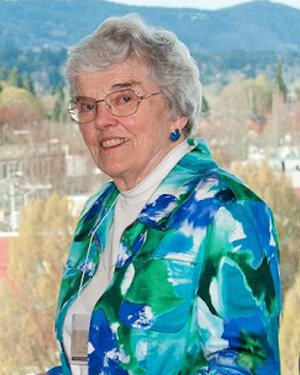 Jo Anne Johnson was born in 1931 in Youngstown, Ohio. She earned a bachelor's degree in Sociology from Denison University in 1953 and a master's in Counseling and Guidance from Indiana University in 1956. From 1959-1963, Johnson worked as Dean of Women at Washington State University, an experience that introduced her to the Pacific Northwest. After completing her doctorate in Student Personnel Administration at Michigan State University, Johnson returned to the west coast in 1965, accepting a position as Dean of Women at Oregon State University. Johnson was the last person to occupy this post within the OSU administration.

In 1969 Johnson, as Dean of Women, and Dan Poling, OSU's Dean of Men, were named Associate Deans of Students, at which point their offices assumed responsibility for all of the university's students. (This same year, Jo Anne married Cliff Trow, a professor of history at OSU and a future state senator.) Jo Anne continued in this capacity until being promoted to the position of Vice President for Student Affairs in 1983, at which point she became the first female Vice President in OSU history. She received another promotion in 1993, to Vice Provost for Student Affairs, before retiring in 1995. In addition to her administrative activities, Trow regularly taught courses through OSU's College Student Services graduate program, continuing to do so even as an emeritus.

During her time at OSU, Trow made a deep impact on the status of women at the university: she worked to combat wage and promotion disparities often encountered by women, she was integral to the formation of the OSU Women's Center in 1972 and the Faculty Women's Network in 1986, she assisted with the implementation of Title IX at OSU through her service on the university's Women's Athletic Board, and she helped to loosen the formal social restrictions that had governed female students' lives for most of the university's history. Throughout her career, Trow also was active in a number of professional organizations, including executive appointments with the National Association of Student Personnel Administrators, the National Association of Women Deans and Counselors, and the Association of College Student Personnel Administrators.

Following her retirement from OSU, Trow focused more of her energies toward community service, paying particular attention to the Benton County Historical Society and the OSU Folk Club Thrift Shop. In 1999 she was honored as Corvallis Senior First Citizen. Annually, her impact on OSU is observed by the university through the awarding of the Dr. Jo Anne Trow Woman of Distinction Award.