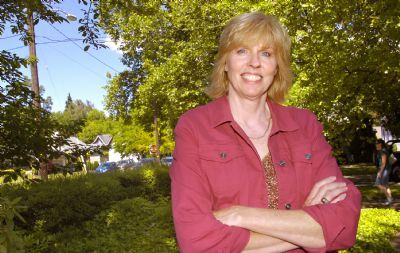 Carol Menken was born in Albany, Oregon in 1957. Though she would later attain great prominence as an athlete, Menken did not play sports as a child. Following the completion of her high school years, she enrolled at Linn-Benton Community College to study Graphic Arts.

During her third year at LBCC, a women’s basketball team was formed at the school and Menken decided to try out – one of seven women to do so. A year later she was offered a full ride scholarship to play basketball at Oregon State University; she was the second female athlete in school history to receive scholarship of this sort. The career statistics that she compiled while at OSU are without peer in school history – she earned All American status in 1981 and still holds multiple school records.

Once she had exhausted her collegiate eligibility, Menken received attention from a basketball team in Italy and eventually became their first foreign player. She remained in Italy until 1988, taking a break in 1982 to marry her husband, Ken Schaudt. She also spent two seasons in Japan while accompanied by her husband. Perhaps most notably, Menken-Schaudt also won an Olympic gold medal as a member of the U.S. team that competed at the 1984 Los Angeles games.

Today, Menken-Schaudt lives in Philomath. The mother of two children, she has worked for a Christian music radio show and in advertising with local businesses.