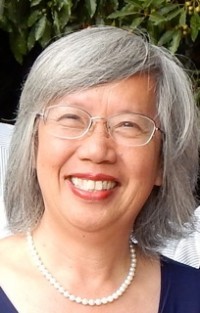 Born in 1945, Bay Area native Judy Li attended the University of California, Berkeley, where she graduated with a degree in Biological Science in 1966. The summer before her senior year, Li took a field class in marine invertebrates, which narrowed her focus moving forward in her academic career. In the fall of that year, Judy met her husband to be, Hiram Li. After graduation Judy enrolled at San Jose State to acquire her teaching credentials, and in the years that followed she found teaching and library work while Hiram pursued his advanced degrees in Fisheries and Wildlife.

Li also spent many years focusing on her role as mother to her two children, but after the family had settled in Davis, California, where Hiram finished his Ph.D., she enrolled in a master’s program in entomology. Focusing on predator-prey interactions between copepods, completed her degree in 1977, and shortly thereafter Hiram was offered a position at Oregon State University in the Fisheries and Wildlife Department. After a few years of peripheral involvement with the department, Judy jumped headfirst into a Ph.D. program. During her candidacy, Judy worked alongside her husband on the John Day River, where she focused on invertebrates and fish diet. After completing her studies in 1990, Li was hired as a research associate within Fisheries and Wildlife. In this capacity, developed an influential class titled “Multicultural Perspectives in Natural Resource,” and worked closely with students as an advisor and graduate mentor. Li retired from OSU in 2006.

In addition to her work in Fisheries and Wildlife, Li has a long history with the OSU Press, beginning with volumes on natural resources topics that she co-edited, and culminating in a series of fiction projects authored for children interested in nature. The first of these books, Ellie’s Log, was so unique that the John Burrows Association at the American Museum of Natural History of New York created an entirely new award to honor it.