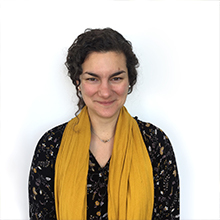 Kassena Hillman was born and raised in rural New Jersey along with her sister. She began attending Drexel University in 2001, pursuing a degree in photography. During her time as an undergraduate, she became a teaching assistant, which she continued to do after earning her Bachelor of Science degree in photography in 2004. She moved into a master’s program with a focus on instruction while she continued helping and advising undergraduate students.

As soon as Hillman completed her master’s degree, she decided to move abroad with her husband. They first went to New Zealand, where they lived out of a van for nine months, working on farms all around the country as a way to secure food and shelter. They did this through Worldwide Opportunities on Organic Farms (WWOOF), an organization that matches farms and workers for an exchange of work for food and shelter. After running out of opportunities in New Zealand, they spent some time in Vietnam and Thailand. This stay in Southeast Asia was followed by a few months in Spain, where they continued to participate in the WWOOF program. Finally, after getting a bit homesick, Hillman and her husband decided to move back to New Jersey.

Once they returned, Hillman began working as a travel consultant for Liberty Travel in Cherry Hill, New Jersey. Due to her vast knowledge of the region, she specialized in planning trips to Oceania. During the year she spent there, her husband was working for a winery in Corvallis, Oregon. Because of this, she decided to begin applying for jobs in the Corvallis area.

Hillman ultimately landed with the Oregon State University Honors College. Her move across the country was temporarily put on hold as Hurricane Sandy blew across the East Coast, but eventually she was able to move out to Oregon. Once arrived, she began doing office work and clerical tasks for the administrative team at the Honors College. She gradually began taking on more responsibilities and was eventually promoted to her current role as an academic advisor. Along with advising students, she also teaches and guest lectures in a variety of courses for Honors College students.