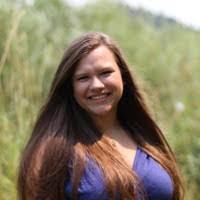 Amanda Hertzberg grew up in Eugene, Oregon as the oldest of four daughters. She attended a small private school in Eugene from kindergarten through the eighth grade. After graduating from middle school, she transferred to a public high school in Eugene where she became very involved in many different clubs and sports. She played basketball and soccer, and participated in track and field until her senior year of high school. She was involved with different clubs at her school, especially religious ones. (These clubs would follow her through her college years as well.) As a student, Hertzberg took many honors and AP classes, one of which - AP Chemistry - made a profound impact on her. The teacher of this course possessed a love for chemistry that Hertzberg had never seen before and instilled her own love for the subject that she decided to pursue in college. Hertzberg applied to multiple colleges with good chemistry departments, but in the end decided on OSU and its chemical engineering program.

In 2015, Hertzberg graduated from high school and moved to Corvallis. At Oregon State University, she continued to participate in numerous clubs, many of which were religious, leading eventually to her moving into a religious house on campus. Hertzberg also joined clubs related to her major, including Women in Engineering, where she was able to interact with colleagues who shared some of their experiences in the field. Although Hertzberg had not really encountered any type of discrimination in her field, it was helpful to learn more about the trials that other women had experienced working in a male-dominated profession.

In 2019, Hertzberg graduated from OSU with a degree in chemical engineering as well as an Honors diploma. She then landed a job at Cascade Pulp, where she works as a process engineer. In this job, she is given projects to work on across the mill so as to make sure that the process of making pulp flows as seamlessly as possible. At the time of this interview, Hertzberg was engaged to be married and in the process of moving from Corvallis to Albany.