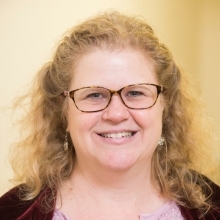 Kryn Freehling-Burton was born in Butler, Pennsylvania, the daughter of a power lineman and a stay-at-home mother. She explains that her father enrolled in night school when she was two and completed this education by the time she was eight. Kryn has a brother who was a year-and-a-half younger than her, and both she and her brother had a close relationship with her grandmother. The impact that her father’s schooling had on her and her future interests in theater and education were monumental, as was her family's transitioning from working class to middle class during her childhood.

After her parent’s divorce, the rest of her childhood was fairly tumultuous. Not knowing what she wanted to study in college, she decided to follow a boy whom she was romantically involved with to whichever college he decided to attend. This proved to be a mistake and she contemplated transferring to another school after the end of her freshman year of college. Ultimately, she chose to remain at the same small school in California and then enrolled in the theater program, which had always been an interest.

During her senior year, Kryn met her second husband, Eric. Together, the couple decided to embark on a feminist journey, in order to discover more about themselves and the world around them. This occurred roughly around the time of her first child’s birth.

This feminist journey continued into Kryn’s time at Oregon State University, where she located after connecting with OSU professor Susan Shaw. After completing her graduate degree at Oregon State, Kryn became involved in many of the university's women’s studies programs as an instructor. She has also been active with the OSU theater community.