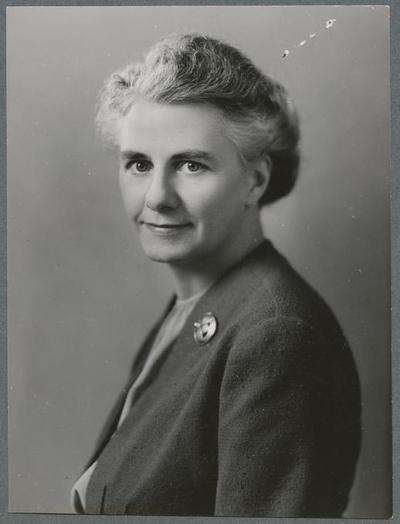 Margaret Fincke was born on October 24, 1900 in Astoria, New York. She attended Mt. Holyoke College where she majored in chemistry and minored in zoology and physiology. After receiving her bachelor’s degree, she travelled for a short time before beginning her graduate work at Columbia University. She earned her master’s and doctoral degrees there and then moved to Oregon State College with the outgoing head of Columbia’s chemistry department. She intended to stay in Corvallis for only two years but ended up remaining for the rest of her life. She was appointed Associate Professor of Foods and Nutrition in 1935, and was later made the head of the Department of Foods and Nutrition. During her career, she primarily taught undergraduate and graduate courses in child nutrition.

Fincke was appointed Dean of Home Economics in 1964, remained in that position for one year, and stayed in the department until 1967. In 1966 she was awarded OSU’s second Distinguished Professor Award. During this period she also took a sabbatical to Kasetsart University in Thailand to do research and act as an advisor in home economics. She then transferred to the Children’s Hospital in Cincinnati, Ohio to research phenylketonuria in infants. She retired in 1969 but continued to be active in academia, living in Rehovot, Israel for eighteen months to become the first director of the School of Nutrition and Domestic Sciences at Hebrew University. While there, she also launched a new educational program for women’s leadership opportunities in Israel.

Fincke was close friends with OSU home economics colleagues Clara Storvick and Betty Hawthorne; the three enjoyed going mountain climbing together. She never married nor had children. She passed away in Corvallis on December 20, 1989.