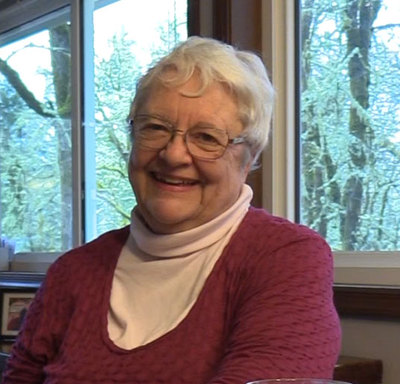 Nancy Lee (Pace) Davis (b. 1935) grew up with two older sisters and a mom who were all college educated. Her father was mostly self-educated, as he didn’t continue formal education past the eighth grade. This didn't stop him from making contributions to the war effort as an engineer during World War II. Nancy grew up in the bustling, increasingly busy city of Portland, Oregon (and for a short time she lived on the Midway Island military base with her father and mother during the war). She went to school half time during elementary school because there were only enough resources to teach half the students at a time. She grew up loving school and, in 1953, following the path of her sisters and mother to go to college.

At Oregon State College, Davis joined a sorority and made lots of friends that she still keeps in contact with now. It was there that she also met "the love of [her] life," her future husband Donald. After Donald had come back from his own military service, he finished his schooling at Oregon State, where he met Nancy. In 1955, shortly after he graduated, they were married and Nancy left school. According to Nancy there were lots of reasons for this, not least important of which was the fact that her parents were already retired, and it wasn't very easy to finance her education. So, after working in an insurance office for a year, Nancy got married and moved to a dairy farm.

After getting married, Nancy and Don faced everything as a team. When she moved to Woodburn with him, she helped in any way she could on the farm. She had grown up in Portland, the biggest city in Oregon, and didn't actually know anything about agriculture at the time, but she learned quickly. It wasn't long before the couple sold their farm and moved back to Corvallis, this time with two kids in tow. They started their next adventure of creating a contracting business together, with Don taking charge of the actual construction and Nancy tracking the finances. This venture lasted into their retirement.