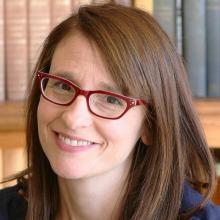 Marisa Chappell was born in 1969 in Madrid, Spain. Her father was an Air Force officer, and she spent her childhood moving all over the United States. In 1987, she began attending Emory University, earning a bachelor's degree in History in 1991 before interning at the Alliance Theatre in Atlanta. From there, she applied to graduate programs along with her husband. Chappell ended up at Northwestern University to pursue a master’s degree; a year later she was accepted into the doctoral program. She received a master’s degree in Liberal Studies in 1995 and a Ph.D. in US History in 2002. She also completed a minor in African History and a graduate certificate in Women and Gender Studies, both in 2002.

After multiple short-term positions at other universities, Chappell came to the Oregon State University History department (now part of the School of History, Philosophy, and Religion) in 2005 as an assistant professor. In 2011, she was promoted to associate professor. In much of her work, including her dissertation, which she later turned into the book The War on Welfare: Family, Poverty, and Politics in Modern America, Chappell tackles subjects related to inequality throughout history.

Chappell was also involved with the United Academics of Oregon State University faculty union from infancy, and was part of the bargaining team that secured the union’s first contract in 2020. In addition to The War On Welfare, Chappell is also the author of Welfare in the United States: A History with Documents, as well as numerous additional publications on race, class, and gender.