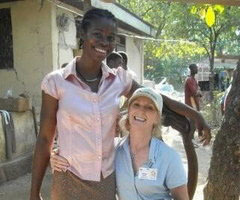 Carol Jeanne Purkey was born in Vancouver, Washington in 1942, although her family lived across the river in Portland, Oregon. After Carol developed breathing problems at a young age, her family moved to Bend, Oregon, where Carol spent the rest of her childhood, living on a farm with her parents and four brothers; she attended Yew Lane and Bend High School. Following high school, she decided to attend Oregon State College. While there, Carol studied mathematics and lived in Hawley Hall. She also participated in powderpuff football, worked on campus as a server, and generally enjoyed all that campus life had to offer.

During her first year at OSC, Carol met Daunt Caudle. After Daunt graduated in 1961, they married and moved to Coquille, Oregon where Daunt had grown up. Soon after, they built a house in nearby Coos Bay and started a family. They stayed in Coos Bay for nine years during which they welcomed three children. After that, they moved to Oroville, California for a few years while Daunt helped start up a plywood plant. While in California, they welcomed their fourth and last child. After the plant was finished, the family moved to Tualatin, Oregon.

In 1978, Carol decided to pursue nurse's training to "help her be a better mother." She studied first at Clackamas Community College and then was accepted into a nursing program at Oregon Health and Science University, where she earned her bachelor's degree in nursing. Over the years, she worked at multiple hospitals, usually in the emergency room. She also held a few head nurse positions, but she never wanted to move into administration because she wanted to maintain a high level of contact with patients.

Later on in her life, Carol began to volunteer with Medical Teams International. Through this organization, she was able to go on multiple disaster relief trips to provide medication and medical care to countries in need of aid. From the mid-1990s to the mid-2000s, she went on eleven trips to countries including Honduras, Haiti, Uzbekistan, Liberia, Mozambique, Afghanistan, and Pakistan. At the time of this interview, she continued to volunteer locally with Medical Teams International, attend church, and spend time with her family, which now includes six grandchildren and two great-grandchildren.