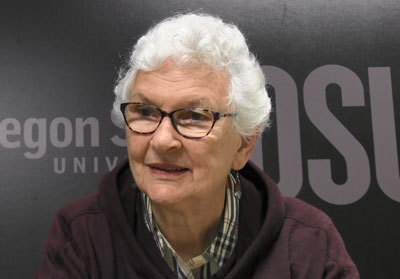 Monte Kay Middlebusher was born in Medford, Oregon and grew up in nearby Prospect, a community of about 200 people. Interested in athletics from an early age, Campbell spent much of her upbringing playing sports. She enrolled at Oregon State College in 1949 and majored in Physical Education as soon as it was offered for female students. When she graduated from OSC in 1953, she did so as a member of the first class of women to receive degrees in P.E. from Oregon State. During her undergraduate years, Monte was a member of Alpha Omicron Pi sorority as well as the Women's P.E. Club, the Orange O honor society, and the Panhellenic Greek organization.

Following the completion of her studies, Monte spent five years as a teacher in Turner, Oregon and Springfield, Oregon. After marrying her husband, Dave Campbell, Monte turned her attentions to raising her three sons. Later on, she pursued a new career as a seamstress focusing on stretch-knit fabrics. Connected with a Eugene-area ski wear company, Campbell taught classes on tailoring unorthodox fabrics including nylon, goretex and parka materials. The final chapter of Campbell's career was in real estate, where she worked as an agent for thirteen years. She was voted Realtor of the Year by the Eugene association in 1994.