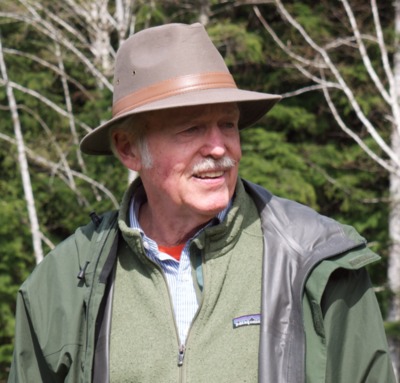 Norm Johnson, a pivotal, though sometimes behind-the-scenes, player in Pacific Northwest forestry policy and planning for many decades, begins this extensive, candid interview recounting his upbringing in Berkeley, California, and education culminating in a PhD at Oregon State University. Key mentors at UC-Berkeley and OSU gave him a foundation in economics and forest planning. He recounts family trips as a child to a cabin in the Sierras which exposed him natural forests and clearcuts, which were a shock.

Johnson next describes his career path of first teaching at Utah State University (at a time before the major environmental laws were passed!), and then he traces the emergence of this legislation and how some laws profoundly affected his work and others did not. He outlines how his forest planning program FORPLAN dovetailed with the Forest Service’s need for such a tool to comply with the new National Forest Management Art to draw him into close working relationships with agencies and, ultimately, the office of the Governor of Oregon. This led to moving to Fort Collins, CO, the base of Forest Service planning operations.

He reflects on how his return to OSU in 1985 quickly led to realization that it was not possible to continue the level of Federal lands timber harvest and meet the environmental standards set in law, and thus began the succession of processes for science input to policy making starting with the Thomas Report (spotted owl report) on through the Gang of Four (+2) and then Forest Ecosystem Management Assessment Team to NWFP. He describes each, his roles and evaluations of them, and outlines how the key players were selected to take part. These revealing, insider stories include choice insights: why he was not part of Clinton’s Forest Summit and how he told Jerry Franklin in 1987 that cutting of old growth has to cease, but Franklin thought he was crazy. Of the Gang of Four project, he says, “We had a grand time!” He contrasts these processes in terms of size of group, diversity of disciplines, BLM vs. Forest Service and Oregon vs. Washington differences, Federal vs. academic participants, and other factors.

Johnson goes on to discuss special challenges of dealing with big environmental crises in general and with the NWFP in particular. He speaks generally about the NWFP as a model of how scientists can help create “a new intellectual and institutional approach” when existing institutions fail (e.g., the Forest Service), but, to do so, scientists have to go well beyond simply summarizing findings. He discusses how Option 9, picked by Clinton as the preferred, came to be and also problems in the NWFP such as Survey and Manage protocols and issues faced by the Adaptive Management Areas. In reflections on the current (2016) state of public sentiment, he asserts that the public would like to see “ecological forestry” practiced, not industrial forestry – at least in southwest Oregon.

He concludes the interview with highly-complimentary reflections on the key player in these policy-relevant processes, and on the NWFP itself, which he says was very successful for old growth, spotted owl habitat, and especially the Aquatic Conservation Strategy, but the low level of timber cut has been a disappointment. In overview, he states that the most important outcome creating the NWFP was its role as “an amazing educational device. It enabled a very wide community to understand forests and their functioning better than ever before.” It was “a magnificent accomplishment.”

Norm Johnson’s early years were in Berkeley, California, including taking a BS in forestry at University of California-Berkeley. After two years of work with the Klamath Indian Trust, he took a MS degree at University of Wisconsin and then a PhD at OSU, where he worked with advisor John Beuter on a report concerning the future of forestry in Oregon. This gave him real-world experience with broad-scale assessment of forest resources and alternative futures. Eager to move on, he took a faculty position at Utah State University where he developed the FORPLAN harvest scheduling program. After passage of the National Forest Management Act in 1976 the Forest Service picked FORPLAN as its principle tool for planning analysis, so he moved to Colorado State University in Fort Collins, which was the center of Forest Service computing and plan development. In 1985 he moved back to OSU where he served as professor of forest policy in the Department of Forest Resources. He was very involved in national forest planning and many students he had advised at OSU took planning positions across national forests in the region. That network proved crucial in the Gang of Four process to assemble knowledge of the distribution of old-growth forests across the region. In FEMAT he was leader of the Resource Analysis Group charged with evaluating timber harvest level for the various options under consideration. In addition to his roles as educator and consultant on forest planning to federal, state, and Indian institutions, Johnson has advised elected officials about governance processes, such as through the Committee of Scientists for the Planning Rule for implementing National Forest Management Art.