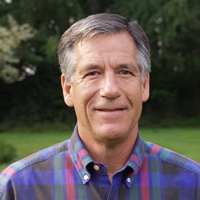 Martin (“Marty”) Raphael had a career as a wildlife biologist mainly with the Pacific Northwest Research Station of the US Forest Service, but his role as deputy to Jack Ward Thomas in management of the Ecosystem Management Assessment Team (FEMAT) made him an important player in development of the Northwest Forest Plan (NWFP). Raphael begins this oral history with discussion of early life in the San Francisco Bay area exploring streams and ponds with friends. He elaborates how it took a while to complete his college education, culminating with a PhD at UC Berkeley in wildlife ecology in 1980, including side tracks working in steel mills and other jobs. His environmental concerns gained focus through Earth Day and reading Rachel Carson. Dissertation work on cavity nesters helped him land a four-year post-doc with the Forest Service Regional Office in California where interest in old-growth studies was stimulated by Jerry Franklin’s work in the Pacific Northwest.

After his stint as a post-doc, he began working with Forest Service researchers in northern California and learning about old-growth forests, spotted owls, and the community of scientists working on those emerging topics. Raphael describes taking a position with Forest Service Research in Laramie, Wyoming, and how that research environment differs from the west coast, where he returned in 1989, and immediately plunged into the “forest wars” environment. He speaks of the influences of Eric Forsman and Jack Ward Thomas as scientists and their work and his own efforts to deliver science information to policy makers through processes such as the Interagency Scientific Committee on the Spotted Owl and other processes, leading up to FEMAT. He describes many of the issues faced in the FEMAT process (e.g., width of riparian buffer strips, viability assessments, outlining and weighing the alternatives, dealing with the marbled murrelet, …) and accomplishing the whole task in 90 days. He elaborates on the origin of Survey and Manage program developed after FEMAT was completed and the angst Franklin and Thomas felt toward it. Then he elaborates on the follow up tasks to the NWFP – lawsuits, court appearances, and helping to translate the language into actual practice on the ground.

In the middle of the interview Raphael begins a long discussion of the marbled murrelet, which has been a major factor in the NWFP and the limits on logging on federal lands. He outlines the history of discovery of its use of forests, its habits, and the biogeographic features of the cryptic bird. The monitoring program gets quite a bit of attention, which includes handling birds and video recording behaviors at the nest sites. These observations are revealing the relation of population figures to forest and marine habitat conditions, and a strong relation between murrelet and chinook salmon population numbers. He discusses genetic and population conditions across the range of the murrelet and prospects for effects of climate change and major disturbance events like fire, windstorms, and “ghosts” of past timber harvest.

As the interview approaches completion, Raphael returns to discuss impacts of the NWFP on old forest habitat (the time scale of recover from the logging period is measured in centuries) and on “timber-dependent” communities. He discusses the significance of Survey and Manage in limiting timber harvest, but sees the extent of the reserve system as the main factor. He comments on the continued decline of the spotted owl, weighing the influence of habitat change and the barred owl, and describes how conflicted he feels about “experimental” killing of barred owls. The relationship of murrelets and recovering habitat is not yet known, he says. He concludes with reflections on some of the people he worked with, including Thomas, speculations on the fate of the NWFP in the political climate, and some points of relevance of the NWFP in conservation measures in other countries.

Martin (Marty) Raphael did most of his growing up in the Berkeley, California, area where his father was on the engineering faculty. He got a BS in social science and worked in a steelmill for two years, before settling into avian ecology for a MS and PhD at Berkeley, graduating in 1980. He stayed on as a post-doc involved in various breeding bird surveys and other studies that the Forest Service in California had underway. In 1984 he moved to the Arcata Redwood Sciences Lab and began interacting with several Forest Service wildlife biologists and getting into the agency research program and culture. After a short stint with the Rocky Mountain Research Station, based in Laramie, Wyoming, in 1989 Raphael moved to the PNW Station in Olympia, Washington, serving as a Research Wildlife Biologist. He picked up responsibility for completion of the major old-growth—wildlife relations program and to help transition Forest Service research into a new era of spotted owl monitoring and then adding work on the marbled murrelet. Thus, he arrived in the Northwest west just as the injunction on logging in federal land in the range of the spotted owl went into effect and the science-policy collision climaxed. Jack Ward Thomas, Leader of FEMAT, called on Raphael to be his Deputy Team Leader to assist in keeping the many parts of the project and the several hundred participants moving forward. Raphael continued to be involved in the process to move Option 9 in the FEMAT report through the NEPA process and with input from Department of Justice lawyers to give the plan high probability of acceptance by Judge Dwyer, so the injunction on logging could be lifted.