A Dramatization of the First Atomic Bomb Test 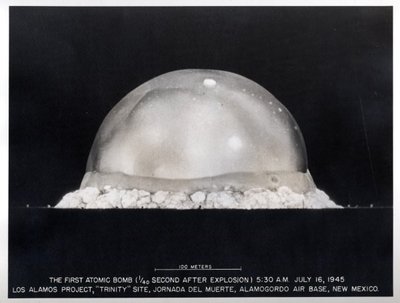 A Dramatization of the First Atomic Bomb Test

Man 1: We can't tell you where you're going. All we can say is that you come to Washington and start to work. It's an important story. Maybe. It's a story that we only want one man working on. And you're the man.

Man 2: Well, needless to say, Bill, you accepted General Groves' offer. Before you go into the business of how they discovered and then made the bomb, I wondered if you would mind going right to the last chapter of the story first and telling me about the first atomic bomb you ever saw go off.

Man 3: The first atomic blast I ever saw, was the first one that man had ever seen. On July 16, 1945 a caravan of scientists in buses and trucks moved along route 318 in the [New] Mexico desert. Through sleepy little towns like Los Lunas, Belham, and Bernardo, into the Sierra Oscura Mountain Range. There near an abandoned reservoir at Alamogordo the titanic labors of our scientists were to be tested.

Man 3: A voice rang out somewhere in the black darkness and filled the night. It was almost 5:30 in the morning. A cold drizzle had been falling since midnight, and there was talk that the test might even be called off.

Man 3: In a tower 20 miles away from me, the first atomic bomb waited in its cradle, a $2 billion baby waiting to be born. Five miles away from the tower that held the bomb, Professor Robert Oppenheimer gave the signal that in a few seconds would set in operation the delicate mechanisms that would release the greatest burst of energy ever berfore released on earth.

Man 3: No buttons would be pushed, no switches thrown. A series of robots were already in motion. The drizzle grew harder. A desert coyote howled in the distance for the last time.

Man 3: And just at that second arose from the bowels of the earth a light not of this world, a light of many suns in one. Don't be upset if you hear no sound. We are 20 miles away, and the sound travels much slower than light. It will be 100 seconds till we hear it. It was a sunrise such as the world had never seen, a great green supersun, climbing in a fraction of a second to a height of 8,000 feet, and then a great cloud rose from the ground and followed the trail of the bright new sun. An enormous cloud in the form of a mushroom, much taller than Mt. Everest. I glanced at my watch; 100 seconds were almost up.

Man 3: The sound of the explosion finally caught up with us. Out of the great silence came a mighty thunder. It was the blast of thousands of blockbusters going off simultaneously at one pinpoint. The thunder reverberated all through the desert, and bounced back and forth in the Sierra Oscura mountains. The earth trembled beneath our feet like an earthquake. And as I listened to this great thunder trying to escape from the trap between the mountain ranges, I found myself asking again and again, "What has man done to these two pieces of uranium, and how did it happen that this secret had been given to us and not to our enemy?"