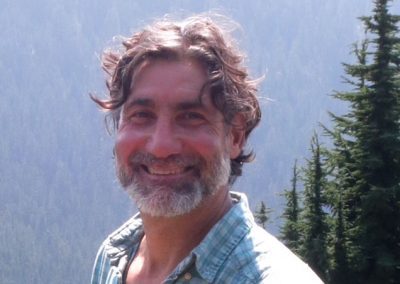 Charlie Crisafulli has a long history as an ecologist with the US Forest Service, Pacific Northwest Research Station, and the central node in the extensive social network of ecology researchers associated with Mount St. Helens, and he has also been a primary leader in the global network of scientists who have developed the field of volcano ecology over recent decades. This oral history takes place at his office and lab within the Mount St. Helens National Volcanic Monument offices in Amboy, WA. Some of the conversation is in the form of an office tour.

Crisafulli begins by recounting his first 20 years in Albany, NY, on 150 rural acres and as part of a large, blue-collar, hard-working, Catholic family in the construction business. His curiosity for natural world “seemed insatiable from the earliest of days” and he spent a great deal of time out in it. But, through his teen years he visited the West, and that planted the seeds for his departure from the East. He reflects on seeing images from Vesuvius and Hawaii, triggering interest in volcanoes as a kid, and then first seeing Mount St. Helens in 1978 while on a cross-country roadtrip with New York buddies. Next, he describes going to Utah State University and connecting with exceptional ecology professor and mentor Jim MacMahon, who would launch his career to Mount St. Helens. Through course work, field trips, and stints as an assistant on field project Crisafulli gained a great breadth of knowledge about the geography and ecology of the western US and made connections with several students of MacMahon’s, who would become central players in Mount St. Helens research in the decades to follow.

Crisafulli describes how the Mount St. Helens connection began with a phone call from Jerry Franklin to Jim MacMahon and that quickly led to a funded research program with Crisafulli designated “the Mount St. Helens kid” to help run MacMahon’s project there, starting with small mammal and then bird studies. He describes the thrill of working in such a wild place and going into it without any geology background, but quickly sorting out enough of the geology story to place study sites along a disturbance gradient. He describes both the risks and adventures of helicopter travel and field safety issues in the volcanic zone, as well as the constantly accelerating learning process as the ecosystem responses played out, especially the roles of surviving organisms and their interactions with invading organisms. He places some of the St. Helens work in the contexts of classic studies following eruptions elsewhere in the world, the eruptive history of other Cascade volcanoes, and the knowledge from past sampling of animals and plants in the St. Helens area represented in museum collections and other sources.

Following a very rough chronology of his St. Helens career, Crisafulli describes how he continued employment with MacMahon at Utah State through most of the 1980s before switching to become an employee of the Forest Service, first on the Monument (National Forest) staff and then with the Pacific Northwest Research Station. He built his home life close to the volcano and with this stability of home and career he built a massive plot system for sampling across the volcanic landscape. He speaks about the challenges of funding the work and how poor the financial support from the Station was until 34 years after the eruption, despite the continuing exceptionally high level of research productivity and the interest of the general public and other scientists in Mount St. Helens. He addresses how the community of researchers at Mount St. Helens has been highly collaborative, and also compares that scene with nearby large experimental forest operations at Starkey and Andrews – “St. Helens stands apart,” he says He continues to describe processes of ecological community change in relation to several theories, while mixing in stories of adventures working and living in the wild field settings of the blast zone.

The conversation turns to the facilities and many collections at Crisafulli’s office they are visiting and then to the work he has been doing in eruption sites in Chile. Then he reflects on the geology, ecology, and general ambiance of some of his favorite places – Mount Margaret, the crater, Spirit Lake, Pumice Plain. This leads him to consider how important Mount St. Helens has been to so many people in so many different ways – especially himself. He describes in detail and with passion the arc of his career of intense dedication to field work and how he is shifting to place more emphasis on synthesis and telling big stories. In response to a question, he comments on people he has worked with over the years, highlighted by MacMahon.

The conversation then returns to the science and logistical constraints of his studies in Chile, which leads to an overview of volcano ecology at the global scale, of which he has been a leader in retrospective analysis of the record of hundreds of published studies. Next, he describes the mood of local communities both shortly and long after the eruption, including the anger against being kept out of parts of the Monument where they visited before the eruption. Some of this came into sharp focus with cessation of logging of old growth on federal lands, conflicts over dealing with elk, and differences in land management among federal, state, and private lands. He elaborates on the pros and cons of a life in academia; he lacks a PhD which is a drawback in some ways, but also liberating to do his sort of natural history work; and, yet, he is highly connected with academia through colleagues and students.

Crisafulli speculates on the future development of ecosystems in the central, most-disturbed part of the landscape, and expects shrubs are in the process of being a big player, but he also expects more boom-and-bust cycles and surprises. He closes the interview with comments on his many, major roles in public communications, especially through high-end outlets like National Geographic, and, then with a final, moving statement about the “spirit of Mount St. Helens.”