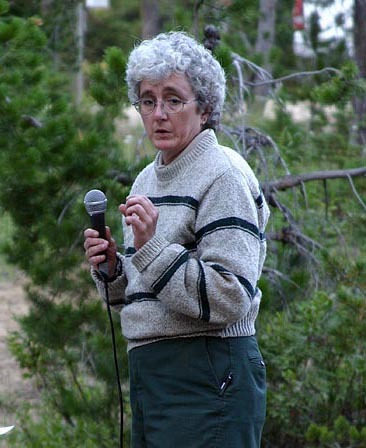 Lynn Burditt has had a long history of leadership positions in the National Forest System of the US Forest Service, and in most of these positions she has collaborated with federal and academic scientists, commonly in the context of research programs at experimental forests and Mount St. Helens. Of particular note, she was Ranger at the Blue River Ranger District on the Willamette National Forest where she worked closely with the Andrews Forest program during the peak of the Forest Wars and she served as Deputy Forest Supervisor on the Gifford Pinchot National Forest where the Mount St. Helens National Volcanic Monument is located.

This oral history takes place outdoors in the Monument landscape during the 2015 Pulse – the every-5-year gathering of the science community working on ecological responses to the 1980 eruption. Burditt begins by recounting her early upbringing in east Tennessee near the Smoky Mountains where family outings gave her lots of exposure to the natural world, which made a lasting impression and set the stage for her formal education culminating in masters degrees in forestry and conflict resolution.

She recollects being in a training program at Oregon State University at the time of the 1980 eruption, and being particularly interested in how Washington Governor Dixie Lee Ray dealt with situation, including the threat of an eruption for the Trojan nuclear power plant – she was a champion of nuclear power. Leading up to and over months following the eruption, the volcano was on the periphery of Burditt’s attention, but in retrospect she is impressed with the administrative decisions that were made to balance access and public safety in a highly-charged and uncertain situation, and that, together with timing of the eruption, limited the number of human deaths. When the volcano became active again in 2004 she was Deputy Forest Supervisor and had to make those kinds of decisions.

The interview then returns to her upbringing in Oak Ridge, Tennessee, home of the National Laboratory (where her father worked) and how that highly-educated community placed high priority on education of its youth. She describes getting a broad educational foundation, including at Iowa State University. Her family gave her many opportunities to experience nature, including trips to Grand Canyon, Zion, and the redwoods, but the biological diversity of the Smoky Mountains and Park remained a major influence.

Burditt goes on to describe her first encounter with the volcano when in 1981 she worked on the Mount St. Helens Recovery Project exploring options for sales of damaged timber. She considers those experiences working in the blast zone as the highlight of her career. Flying in by helicopter every day and seeing the massive extent of the altered landscape were awe inspiring. She describes the sights, sounds, smells, and vivid views. She comments on the sense of risk in helicopter travel and the adventures of getting into places where others had not or could not go. “I just feel so grateful,” she says. But, when her 6-month detail was over she moved to positions elsewhere until she returned as Deputy Forest Supervisor with the Monument in her responsibilities. Although she was not directly involved in defining and establishing the Monument, she clearly describes the Act’s intent and land managers’ responsibilities – recreation and interpretation. She goes on to discuss the history of the several visitor centers managed by the Forest Service and others. The federal budget process made it very difficult to fund these, which complicated relationships with local people, who wanted more access and money-making development and less attention to environmental protection to provide opportunity for science.

Burditt speaks at length about restrictions on public access to let “natural processes proceed substantially unimpeded,” as directed by the Monument Act, even decades after the eruption. This is a major source of tension with the public for land managers, such as herself. She comments on telling employees she supervises to assume that everyone who complains about policies has positive motivations and to try to understand them. Then she comes back to her deep respect for the volcanic landscape and the lessons it has about the power of nature and the importance of public lands, which she believes in deeply. To her, the Monument is an important opportunity to display that and provide interpretation. She speaks highly of the Monument’s interpretive program, which has become a model for other organizations, even parts of the Park Service.

The conversation then addresses broader issues, such as the different types of federal lands in the Northwest and their different management objectives and approaches, and she elaborates a bit on her current position in the Columbia Gorge Scenic Area. There is discussion of salvage logging on Forest Service lands before the Monument boundary was set and the contrast between the private industrial (e.g., Weyerhaeuser) and Forest Service approaches in the eruption impact zone. She expresses broad, open-minded perspectives. She goes on to discuss various federal, state, and private lands issues in the Northwest in general and in the vicinity of the Monument in particular, before returning to the topic of interpretation programs for the public and the challenges of dealing with alternative points of view, including creationism. This leads to other values of Mount St. Helens and she notes how the work there and at the Andrews Experimental Forest has been complementary in shaping attitudes and approaches to federal forest lands management generally. Having some of the same scientists working at both places was part of that story. She closes with reflections on a few key moments in her career, such as experiencing the sounds within the Mount St. Helens crater, and concludes that it’s all about, “continuing to observe and learn and modify.”