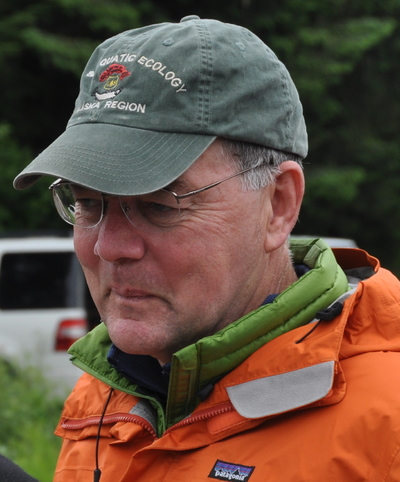 As a fisheries biologist for the Pacific Northwest Research Station of the US Forest Service, Gordon (”Gordie”) Reeves played important roles in several of the major processes for delivery of science information to policy makers, including the Forest Ecosystem Management Assessment Team (FEMAT), which laid the foundation for the Northwest Forest Plan (NWFP). Reeves begins the interview describing his early upbringing along the New York-Canadian region, including exposure to the outdoors, which stimulated his interests in nature and aquatic systems. He had never been west of Pennsylvania until moving to Arcata, California, to go to grad school in 1975 at the age 23. He describes the strong mentoring he received at Humboldt State University and then his PhD work at Oregon State University while also working for the Pacific Northwest Research Station on a fisheries topic. He recounts a fascination with fishing for salmon and steelhead, and got a big dose of fly-fishing from his Humboldt State profs. The eruption of Mount St. Helens in 1980 also diverted his attention in exciting ways and got him working with Jim Sedell on streams and Spirit Lake in the blast zone. These several projects with the Forest Service led to a more secure position and duties leading field crews and data management, including on the Elk River on the southern Oregon coast.

In the decade of the 1980s Reeves began thinking about the River Continuum Concept (Sedell was a co-author on the then-recently-published, seminal paper) and the need for better concept of how rivers function and change over time, which became a critical concern for him in the context of the “Forest Wars.” He discusses complexity of the old-growth forestry issues, drawing in part on his perceptions from living in the northern California coast Redwood country where logging of old forest was in full swing. He reviews interactions with National Forest staff from Supervisors to “-ologists” on the topic of impacts of clearcutting on fish, including staff from the Siuslaw and the Siskiyou National Forests. Experiences in the Oregon Coast Range where old growth is rare led him to question the generality of roles of wood and sediment in streams of other forest age classes, and the temporal dynamics of rivers, especially after wildfire.

Reeves describes how a fateful phone call from Norm Johnson in May of 1991 led to his participation in a succession of major processes for science input to policy makers – the Gang of Four (Plus 2) leading to the Scientific Advisory Team for Judge Dwyer and FEMAT and various dimensions of the NWFP. He describes critical moments in his professional life and possibly the future of forest management when Jack Ward Thomas recruited him and Jim Sedell to represent fisheries interests in those science teams. Many adventures in Washington DC and Portland followed in quick succession, including interactions with members of Congress and Forest Service leaders over impacts to fish portrayed in the National Forest planning documents. He describes helping Sedell prepare for Clinton’s Summit, and also providing leadership within the FEMAT process led by Jack Ward Thomas. He speaks of having a 6-month leave in New Zealand to recover, which was a time for reflection on what had transpired. He continued to think about the dynamic nature of river systems and how to manage rivers, given fish biology and human social factors, including tribal lands and rights and federal agencies. He describes the rough times of presenting their work to national forest staff and the importance of Willa Nehlsen and the publication on status of salmon stocks she led – “Salmon at the Crossroads” – and how her home agency banished her.

Reeves proceeds to discuss designations and monitoring of watersheds to meet different standards of habitat and water quality. He elaborates on how aquatic ecosystems function and the implications for watershed restoration and compliance with the Clean Water Act. As he considers the successes and shortcomings of the NWFP, he extols the virtues of the Aquatic Conservation Strategy and the brilliance of Jim Sedell, his long-time friend and colleague.

Gordon Reeves was born in Canada, but grew up just across the river in Niagara Falls, New York, where he had a great deal of exposure to the outdoors in that part of the world. After gaining a BS degree in biology at State University of New York in Oswego, he headed west to Humboldt State University where he undertook a MS in fisheries. He met Forest Service research biologists Fred Everest and Jim Sedell, based in Corvallis, and began working with them on various fish-related projects, even as he pursued a PhD at OSU. After graduating in 1985 he continued to work on Forest Service projects in the Elk River of southwest Oregon and in southeast Alaska. Controversy over logging in steep, landslide-prone terrain of the Elk River watershed connected him with the politics of Forest Service land management of the late 1980s. When a congressman said to members of the Gang of Four (Franklin, Gordon, Johnson, Thomas) that he did not want to see a management plan that would be upset “by some damn fish,” Reeves, a Research Fish Biologist with the PNW Station, and Jim Sedell were recruited to represent interests of aquatic systems in the assessment of the status and future of federal lands in the range of the spotted owl. Those efforts continued into FEMAT in which Reeves was co-leader (with Sedell) of the Aquatic/Watershed Group, which developed the Aquatic Conservation Strategy.