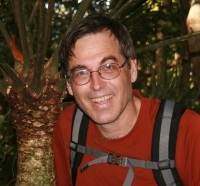 Tom Spies took a post-doc position with Jerry Franklin in 1983 to lead a study of old and young forests in the Pacific Northwest, which led to a career of it as a forest ecologist in the Pacific Northwest Research Station of the Forest Service, including a key role in the Forest Ecosystem Management Assessment Team (FEMAT) leading to the Northwest Forest Plan (NWFP). In his early years and his family had many outdoor experiences near their Menominee, Michigan, home, especially around the Great Lakes. His family had been in the forestry business around 1900. While growing up he was more interested in physics – the “hard sciences” – than wild nature, but he liked amphibians and was a Boy Scout, so he had several exposures to the natural world. Several professors at U. of Michigan served as mentors who fired up his interest in field work, and he describes an influential road trip with college buddies to the West. He dabbled in tropical ecology, stimulated by working with sea turtles in Costa Rica and an encounter with Dan Janzen. But, he recounts sticking with forests of Michigan and benefitting from a year in Germany for his graduate degrees gave him landscape and cultural perspectives on forests and forest management, including old growth.

In 1983 be began a post-doc with Jerry Franklin to locate and study old-growth forests of the Pacific Northwest and compare them with other age classes – just as the “Forest Wars” were gaining momentum. He discusses his mixed personal feeling about the liquidation of old growth that was underway on Federal lands at that time, but he was really attracted to the landscape and research culture he found in Corvallis, which contrasted with the more “buttoned-down” Michigan style. He says he couldn’t believe he was getting paid to work in the beautiful forests, but Franklin told him, “It’s hard, but we’ve managed to make it work.” He describes his initial exposures to the Andrews Forest and working with people on ranger districts who helped him find old-growth stands, many of which were slated for clearcutting in the near future. Interactions with land managers was an important part of the job. He describes how environmentalists pushed for scientists to take positons for old-growth protection – “Don’t just measure it” – and how testimony before Congress led the Chief of the Forest Service to fund remote sensing research to survey distribution of old growth, as the Wilderness Society was doing. He speaks of interacting with spotted owl biologist Eric Forsman and others in the course of his work on the Old-Growth Forest Wildlife Habitat program, and also his decline of Jack Ward Thomas’s invitation to take part in the Interagency Committee on the Spotted Owl team. He also did not participate in the Scientific Advisory Team to Judge Dwyer; he said he was just trying to get his science job done, but he did have some involvement with the Gang of 4. He recounts a conversation with Senator Mark Hatfield on a trip to the Andrews about the point, “Will cessation of old growth logging come sooner or later?” And gradually he became aware of the larger picture of forestry across the Pacific Northwest.

Spies goes on to review key publications about native forests and the politics and positions agency, academic, and other folks were taking toward Jerry Franklin’s New Forestry proposals and the related debates about clearcutting. In a lengthy discussion of roles (or not) in the various science-input-to-policy processes, he mentions his push for Adaptive Management Areas. All this background led into his deep participation in FEMAT, and he felt the entire relevant science community was prepared as well, which he describes in detail. In speaking of his roles, he features design of Late-Successional Reserves, including mapping and weighing issues such as risk of wildfire under different options leading to the formulation of Option 9, the selected alternative. He describes the many contexts in which “expert opinion” or “guess” is exercised in species viability assessment and weighing alternatives. Next, he describes how after FEMAT jockeying took place to add Survey and Manage – a species-based “fine-filter” conservation approach – to the coarse-filter, broad landscape zoning approach of FEMAT. As an extension of the NWFP work and an effort to the scale the NWFP to a sub-region, Spies teamed up with Norm Johnson and aquatic scientist Gordie Reeves to undertake the multi-ownership Coastal Landscape Analysis and Modeling Project in the Oregon Coast Range to model alternative future landscape scenarios and assess ecological outcomes. He also describes designing monitoring systems for evaluating the NWFP and then reviewing how the NWFP has performed, noting the importance of the barred owl, which had not been accounted for in the plan. He notes that another big challenge has been wildfire, especially on the dry east-side of the Cascades, and he addresses climate change, the challenge of meeting expected timber harvest levels, and other complications with the NWFP.

Spies concludes with comments about how the focus on old-growth forests spread around the world, public skepticism of science, and how social and technical aspects of forests have merged conspicuously over time.

Born, raised, and schooled in Michigan (all his degrees are from University of Michigan), Tom Spies came west in 1983 to take a post-doc position with Jerry Franklin studying old-growth forests. When a permanent position became available, he stayed on as a Research Forester in the PNW Station. He first joined the multi-agency Old-Growth Forest Wildlife Habitat Research and Development Program investigating young, mature, and old natural forests and their key fauna. This project took him to the Cascades, Coast Range, and Klamaths, which quickly familiarized him with the region. He brought deep knowledge of forest and landscape ecology from his previous work in Michigan and Germany, and, once in the Northwest, he teamed up with Franklin and many others in the Andrews Forest group, as reflected in his participation in numerous, multi-authored synthesis publications. With writer/social scientist Sally Duncan he co-edited the 2009 book Old Growth in a New World comprised of essays with many perspectives on this topic – from forest industry voices, environmentalists, scientists, a philosopher, and others. In a career-culminating, multi-year project he led the synthesis of science produced since the NWFP was signed in 1994, resulting in a document spanning 1100 pages. Spies was an important player in the Terrestrial Ecology Group of FEMAT.