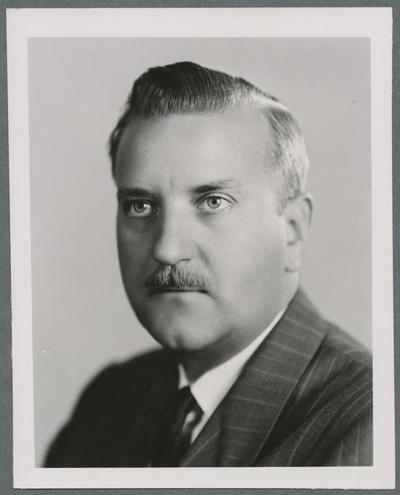 Gilkey begins the interview by talking about his youth: where he grew up, and what his parents did for a living. Then, he begins to talk about attending Albany College (1929-1933), and how he managed to pay for college right at the beginning of the Great Depression. He explains the printmaking process, which he learned as a graduate student at the University of Oregon, and talks about his master's project - a book of etchings of the construction of the new U of O library.

He then talks about his wife: their meeting, as well as her education and career. He tells the story of how he created the fine art record of the 1939 New York World's Fair, and how he obtained a publisher for this record. He mentions President Roosevelt's interest in his book and his prints of the Fair, as well as touching on several museums that own the original prints he created for the event. From there, he talks about the beginnings of his teaching career at Stephen's College in Missouri.

Next, Gilkey discusses his military service, during which he supported the Roberts Commission, corresponding with President Roosevelt in an effort to create a group of people to instruct the troops on the locations of monumental items to be protected. He describes his experience trying to become an actual Roberts Commission soldier, and being in charge of the confiscation program at the end of the war.

The remainder of the interview, focuses on Gilkey's time as a faculty member at Oregon State College. To begin, he talks about coming to OSC after the war, in 1947, taking on the position of Chairman of the Art Department. He details several things he did to help the fledgling art department at OSC. In 1964, he became the Dean of the School of Humanities and Social Sciences, and he explains how he used this position to implement new liberal arts majors into the university. In 1973, the School of Humanities and Social Sciences became the College of Liberal Arts, solidifying the developments made to the curriculum. He remarks on the growth of the art department in the three decades he worked at OSC. He explains his motivations for creating an Exhibit Exchange with global art museums, and talks about working to implement a foreign exchange program for students in all disciplines to study abroad. He also discusses his desire to have graduate-level Liberal Arts programs at Oregon State.

Gilkey next talks about his retirement, and the controversy surrounding the final location of where his graphic arts collection would reside. He also mentions his push towards The Great Hall at Oregon State, noting the efforts he made for it. He likewise comments on institutions that offered to house his graphic arts collection, explaining why he chose the Portland Art Museum and School to house his collection. He also talks about the classes he teaches there, as well as his current position in the museum itself. To conclude his interview, Gilkey discusses his vision for state educational institutions, believing they should continue to grow, and that students who want to attend Oregon State and major in the Liberal Arts shouldn't be turned away.

Gordon Waverly Gilkey (1912-2000), a native of Scio, Oregon, earned a bachelor's degree in biological science from Albany College (1933) and a Master of Fine Arts degree in Printmaking from the University of Oregon (1936). On active duty in the Air Corps from 1942-1947, Gilkey was one of the "Monuments Men" who recovered art stolen by the Nazis during World War II. After the way, Gilkey assumed the position of chair of the Art Department at Oregon State College. He became dean of the School of Humanities and Social Sciences in 1964 and, in subsequent years, served as Dean of the College of Liberal Arts. An accomplished artist and art collector, Gilkey retired from OSU in 1977.