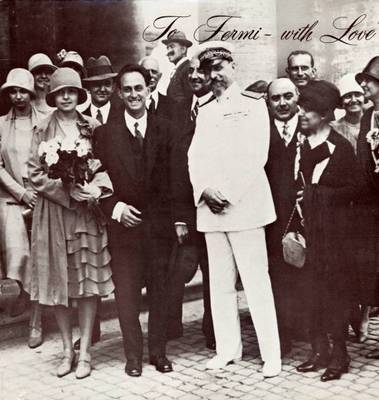 Extracted from "To Fermi with Love" records set.

Jay Andre: By 2pm, the scientists were back on the racquets court. The experiment continued. Herb Anderson remembers Fermi's confidence:

Herb Anderson: Then back from lunch, he called for another increase in activity, again predicted it on the nose, you see. Then finally he says "Now we'll make it chain react." For the first time in the history of man, we'll pull the rod out, and....

Jay Andre: The cycle had become habitual. Setting the automatic rod, withdrawing the control rod, listening to the counters, checking the graphs, resetting and beginning again. The most dramatic description of the final minutes of the event came from Arthur Holly Compton:

Arthur Holly Compton: We entered the balcony at one end of the room. On the balcony a dozen scientists were watching the instruments and handling the controls. Across the room was a large cubical pile of graphite and uranium blocks in which we hoped the atomic chain reaction would develop. Inserted into openings in this pile of blocks were control and safety rods. After a few preliminary tests, Fermi gave the order to withdraw the control rod another foot. We knew that that was going to be the real test. The geiger counters registering the neutrons from the reactor began to click, faster and faster, until their sound became a rattle. The reaction grew until there might be danger from the radiation up on the platform where we were standing. "Throw in the safety rods," came Fermi's order. And you could see the pointer move right back to zero. The rattle of the counters fell to a slow series of clicks. For the first time atomic power had been released. It had been controlled and stopped.