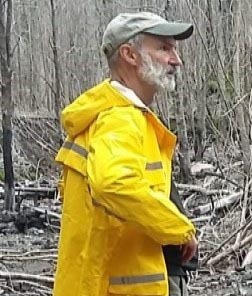 Fred Swanson had a long career as a Research Geologist with the Pacific Northwest Research Station and a strong focus on the geology-ecology interface in ecosystem research groups at Mount St. Helens and the H.J. Andrews Experimental Forest. His roles included conducting research, administration, and communications, including engagements of artists and creative writers in those places. He begins the interview with a quick summary of his geological life leading to Mount St. Helens and his early connections with geology on the east coast and upper Midwest homes of his grandparents. The path leads through Bermuda, a year of work with the US Geological Survey, Hawaii, Galapagos, the Andrews Forest in the 1970s, and collaborations with a key USGS geologist, Dick Janda, also working in forest geomorphology in the context of intensive forestry practices. He describes how forest geomorphology – and geology-ecology interactions more generally – and the connection with Janda greatly aided his engagement with Mount St. Helens, including his first visit on day 10 after the eruption, which he recounts in some detail. This leads to discussion of organization of initial inter-disciplinary ecological science at the volcano, including the Pulses – gatherings of large groups for two weeks to conduct studies and share stories in the first two, post-eruption summers. These gatherings were crucial in building community relations, which helped in compilation of the two books on ecological studies at Mount St. Helens. He also comments on how Andrews Forest scientists participated at Mount St. Helens in the very early period, but were deflected to work at Andrews as the Long-Term Ecological Research program got underway there. U. of Washington scientists got some of the early ecological studies going at the volcano, too, and stuck with them, notably Roger del Moral, plus Bill Fagan from U of Maryland.

Next Swanson turns to geology-ecology work in the volcano context more generally, including use of damage to vegetation by USGS geologists to interpret temperature of deposits at Mount St. Helens, and also at Chaiten volcano in Chile. Then the conversation jumps around, first turning to operations of the Monument, its design and advisory board and efforts to track who was doing what science where. Some comparisons with eruptions elsewhere leads to the overview of the history of eruptions since Krakatoa in 1883 led by Charlie Crisafulli, the small fraction subjected to ecological studies, and the role of work at Mount St. Helens in that global body of works. Discussion follows about the many factors that have made St. Helens prominent in the field of volcano ecology.

The second phase of the oral history begins with Swanson reiterating his early career exposure to interdisciplinary research in far-flung places leading to Andrews Forest and Mount St. Helens. He describes how the work in inter-disciplinary teams at those two places was exceptionally well suited to development of concepts geology-ecology interactions. He tells a story of Jerry Franklin’s leadership and mentorship involving going out on a limb into unexplored territory – in science, policy, and life. And he discusses friend and colleague Jim Sedell, who had his undergrad degree in philosophy, as an example of how lack of formal training can be liberating in terms of creative thinking.

Swanson then describes major aspects of his Mount St. Helens engagements, including early field work experiences in the blast zone and crater, lecturing opportunities, such as in NSF in DC, participation in planning for the Monument, and then how these experiences fed into studies at volcanoes with recent eruptions in Chile. The next phase of the interview places the history of work at St. Helens in the context of the 35th eruption anniversary. The topics touch on science lessons learned, their relationship with current forestry issues, lingering land management issues within the Monument, the patterns and pace of ecological change in the landscape, and relations with the science fields of landscape and disturbance ecology, which emerged during early phases of work at Mount St. Helens. He also reflects on the work around St. Helens before 1980, including a 1978 field trip led by USGS geologists Crandall and Mullineaux, who forecast the eruption, and what important ecological issues may arise there in the future. This leads to the topic of Mount St. Helens as a bioregional icon and the roles of arts and humanities in the cultural connection of society with that place, including facilitating the connections of writers, such as Gary Snyder, who climbed the volcano as a teen in 1943 and 1945. All in all, he is thankful to the mountain for this experience.