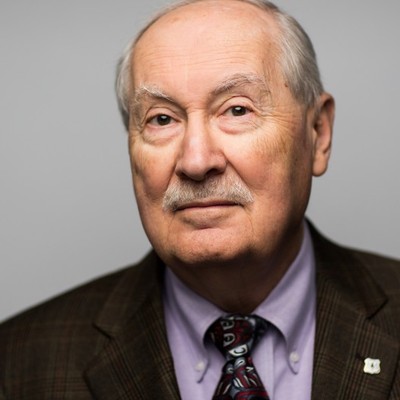 When Mount St. Helens erupted in 1980, Jerry Franklin had been leader of the Andrews Forest ecosystem research group, a collaborator with U. of Washington ecologists during the International Biological Program (IBP), a program officer in the National Science Foundation (NSF), and a leading forest ecologist in the Pacific Northwest Research Station of the US Forest Service. Collectively, these experiences positioned him to be the primary leader of ecosystem research in the early post-eruption period at Mount St. Helens. Franklin begins the interview speaking of growing up in Camas, Washington, and being well aware of volcanoes as a part of the Pacific Northwest landscape, and even an active part, when he visited the Kautz Creek mudflow site on Mount Rainier. But, he says he did not expect to experience an eruption in his lifetime. He describes his doctoral research on vegetation in the Mount St. Helens area and learning about its very active eruptive history from USGS geologists Crandall and Mullineaux, who were studying it, which led them in 1978 to predict another eruption soon. He goes on to describe his science leadership roles in the 1970s, such as in IBP and NSF, and a key feature was interdisciplinary work at the Andrews Forest.

As Mount St. Helens became active, he did not expect to undertake science there, but the eruption clearly presented a major opportunity, so he teamed up with fellow Andrews scientists Jim Sedell on the aquatics research front and Fred Swanson on geology connections, and tapped NSF support to begin investigations for a large community of scientists. His memory and records of the early days are sketchy, but he recounts early helicopter trips with many scientists, and the surprising discovery of the importance of biological legacies from the pre-eruption ecosystems everywhere except the pyroclastic flow zone. It was a “delight”, not humbling to have preconception overturned. Next, he outlines the research approach of sampling terrestrial (using especially long-term plots) and aquatic systems in the various disturbance zones, including Spirit Lake, which presented health issues for researchers. In addition to conducting the science, there were important tasks of coordinating the science community, in part through large gatherings termed “pulses,” and assisting many others on logistical matters such as securing access permits, radios, and helicopter support. All this was complicated by shifting eruption status of the volcano. Instrumentation for sampling was generally simple, e.g., it was pre-GPS and use of computers in the field. He offers some discussion of the stark conditions, declining to see it as beauty and acknowledging how uncomfortable it could be in the heat and dusty ash.

Franklin next discusses the response of land managers in terms of the pace, intensity, and pattern of salvage logging of dead forest in the blast zone, and the fast pace of it motivated establishment of the National Volcanic Monument. He expresses great satisfaction with the Monument, especially its size, but also frustration with the state fisheries agency which wanted to plant fish everywhere. The tussle over whether the Monument should be managed by the Forest Service or Park Service is also considered, as are issues of economic development from several points of view, including by counties. Franklin goes on to discuss his use of field gatherings termed pulses as team-building exercises for his own diverse crew after he returned from NSF and how this worked in the large group from many institutions involved at Mount St. Helens. He comments on how the work at the volcano and Andrews Forest facilitated and necessitated an interdisciplinary approach, which contributed to the impact on science and public understanding, and the critical role of disturbance events in catalyzing the team efforts, especially in drawing attention to what the events left behind. This leads to discussion of the conflict between recognition of the importance of biological legacies following natural disturbance and the great reduction of legacies after clearcutting, and how that is addressed in the Northwest Forest Plan.

Franklin offers his thoughts about further ecological research needs in the Mount St. Helens area, emphasizing a whole-system view for the whole area with special attention to climate change and extreme events. He sees recovery as a process of metastasis from biological hot spots, i.e., sites with plenty of water to support vegetation development. He also points to the importance of early seral communities, i.e., in the period before trees dominate a site. These concepts carry into considerations of forest management and policy. There’s some discussion of the value of the arts and humanities for broad communications, though he has some personal skepticism. He speaks of the cultural shift imposed by the eruption and how it may be a local manifestation of the larger, regional cultural shift away from small communities with a timber-based economy. And the eruption made people realize geology is alive – and potentially hazardous. And he commends the culture of the research community centered at Mount St. Helens and the exceptional job Charlie Crisafulli has done nurturing it since the early days. He follows with discussion of influences of earlier tephra fall on the absence of beargrass in a large area and how tephra soils affected tree planting in the blast zone. In conclusion, he sees his greatest role at Mount St. Helens has been as a facilitator and communicator, despite some misgivings about a manuscript on biological legacies that has lingered for many years.