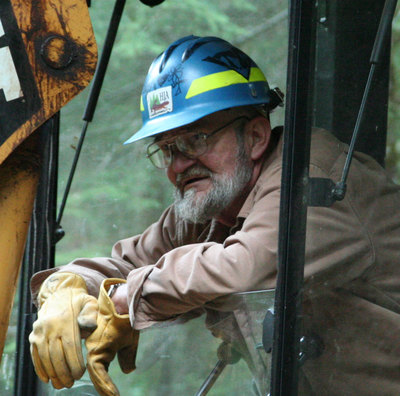 Terry Cryer was the Trades Maintenance worker at the Andrews Experimental forest for many years and in this role he led construction of many of the buildings, field research facilities, kept the large, complex infrastructure functioning, and added art works to many parts of the facilities. He begins the interview describing his upbringing in rural Louisiana and learning basic life skills for dealing with being poor and fixing and fabricating all things mechanical. His father ran a service station where Cryer began working at age 10, and he learned “the customer is always right” attitude of service and enjoyed father-son hunting and fishing, but he quit hunting after returning from difficult Army service in Vietnam. When he returned from Vietnam he was “messed up,” went AWOL [away without leave] when he had only weeks to complete his duties, and met his future wife while roaming around. He goes on to describe his 4 yeas of AWOL, reconnecting with his father, and gradually getting recentered with the help of his wife, while doing construction jobs to sustain himself and his wife. He gained a great deal of experience in the major trades while working for contractors in Arizona and Oregon who valued his skills and work ethic, but he maintained independence and never joined a union.

In 1981 Cryer began working at the Andrews Forest headquarters site then in early stages of development with “ugly house trailers” and soon to be termed “the ghetto on the meadow.” He describes the fix-up work they had to do on those dilapidated trailers and how he and the site manager prayed and anointed trees they planted to landscape the site so they would survive. That began a long relationship with Forest Director Art McKee; Cryer recounts how together over the years they developed the on-site facilities: shop, offices, laboratories, residences, and, ultimately the meeting hall, teaching lab, cafeteria, and outdoor pavilion. He tells stories of the complexities created by doing this work in a remote setting and at the interface of the Forest Service and the university – different bureaucracies, rules, and cultures – and doing it on a shoe-string budget with funding from several sources – Congressional earmark, National Science Foundation (NSF), and US Forest Service. The early construction was done in-house, but over time more of the work was contracted out. McKee would set the goal and Cryer would draw up the plans and guide the construction. In addition to buildings, there were issues of overall drainage, sewage, garbage disposal, and facilities to support worker safety (emergency cabins) and instrument installations, like meteorological and stream gauging stations in remote areas around the experimental forest and in some satellite research sites.

Cryer goes on to describe his important connection with the burgeoning science at the site. The first building, the shop, which was the base of operations for development of the rest of the facilities, was given the name “Research Support Building” in the successful NSF proposal to fund it. He recounts that he supported many field research projects with designs and construction to get the science done, even as the facilities crew was busy with site development and maintenance. He expresses admiration for the science efforts being made at Andrews Forest and attributed that feeling to his upbringing in the church – “God told Adam this is your job to dress and keep the garden. … I admired this community from the first time I met them.” He speaks specifically about some of the scientists, like Jerry Franklin, Stan Gregory, and Mark Harmon and some of their big projects he helped with. And he expresses pleasure at seeing new folks come into the Andrews scene. Returning to the topic of facilities, Cryer describes and show off some of the decorative and functional work he did on the interior of buildings, including art works, such as paintings and a large mural in the conference room.

He discusses several adventures at the Andrews, such as shoving a 5-ton rock along the road two miles to its present position next to the flagpole to support the Man and the Biosphere plaque, and also weathering the 1996 storm and resulting flood. Extreme precipitation events like that reveal weaknesses in design of drainage from buildings and across the land. At this point in the interview, he comments on how he will have to unlearn construction techniques appropriate for the Oregon climate and learn how to work and build in Louisiana, where he will retire. The conversation then turns to a long description of getting his wife to settle at the Andrews (she had a “gypsy” spirit, wanting to move frequently), raising and home-schooling their daughter there, the death of his wife to cancer, and the life trajectory of his daughter. He next turns to his working relationship with John Moreau and the hazards of the mountain landscape work environment. From the perspective of an artist himself, he speaks positively of the development of arts and creative writing at the Andrews. At this point in the interview, his facilities management assistant and pastor Doug Fairrington enters the conversation and has many complimentary things to say about Cryer’s contributions to their church and community.

Cryer closes with thoughts about returning to Louisiana after 40 years of absence and how he’ll have to adapt to the sights, smells, tastes, and culture.