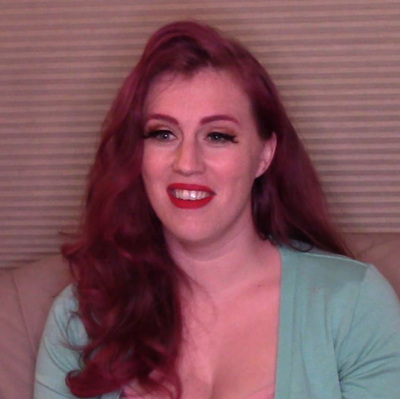 Holly describes the difference between Neo-Burlesque and Classic Burlesque, saying that she tends to perform in a more Classic style. The Classic style is a throwback to the style of dance in the ‘30s, ‘40s, and ‘50s with gowns, beautiful dresses, sparkles and rhinestones. The Neo--Burlesque style tends to be more thematic and based on popular contemporary characters taken from Nerdom. Holly shares that, for her, performance is based all around the costume. Her favorite part about Burlesque in general is the creativity that goes into making the costume.

Holly was born in Seattle, Washington and grew up in San Diego, California. Her family was artistic and they were always making something to decorate the house for different holidays. She confesses to not being very athletic in high school but she did take four years of dance classes as a way of getting out of high school PE. She shares that she has always loved vintage patterns and clothing, collecting vintage patterns on eBay in her youth. She got her start sewing when a neighbor taught her to read a pattern, cut fabric and build a Renaissance dress for herself in high school.

In 2008 in Seattle, a friend introduced Holly to Burlesque. She began to help out at Burlesque shows by Kittening. At a Burlesque show, the Kitten is the person who picks up clothes and props after an act is done. After being around Burlesque shows for a year or so, Holly decided she would perform. When she moved to Portland around 2009, she found a group of performers to work with. They did shows at the Hawthorne Theater. Soon she organized qualified Burlesque people to teach different aspects in the art of striptease, and they started the Rose City School of Burlesque. She gives credit to Charlotte Treuse for pushing her toward the Classic Burlesque style. Subsequently, in 2011, Holly won the Most Classic Award at the great Boston Burlesque Exposition.

Holly details the difficulties in teaching students and learning, on-the-job, how to teach and run a school. She shares how she became disenchanted with the difficulties and quit Burlesque, selling all her costumes, giving up the school, and not performing. After an eight-month break, she started over. In 2013, she started the All That Glitters Burlesque Academy. She describes the journey with that school of beginning by teaching in bars to having her own studio space. Holly explains the details of what the curriculum is at a Burlesque Academy. She details that they cover basic movement, introductions, history, costuming, the vocabulary of dance, how to enter and exit the stage, how to pose, and how to deal with problems when they arise while you are on stage. Holly teaches classes, but also has some adjunct teachers and guest instructors from out of town.

Holly started her costume boutique shop on Etsy in 2010. She lists the wide array of garments, accessories, and lingerie that she offers. In addition to running the Burlesque school and her online boutique, she organizes photo shoots and runs a social club. She takes Tahitian and hula dance classes each week.

Holly feels that she has been big part of the expansion of Burlesque in Portland because of the two Burlesque schools she founded. She has trained many performers, and those performers have helped develop the audience in Portland for Burlesque. She tells about what a struggle it was to be taken seriously in the local newspapers around 2008 to 2015. Speaking of Burlesque today [2019] Holly feels that there is a lot more public acceptance of Burlesque and a lot more acceptance of the diversity in Burlesque bodies. She wishes there was more room for diverse bodies and that the same skinny, white women wouldn’t get hired over and over.

Holly describes the audiences at a Burlesque show as being very accepting. She notes that Burlesque performers are treated better by audiences than strippers are in strip clubs.

In 2013 Holly and some performer friends decided to organize a big event, the Oregon Burlesque Festival in Portland. At the time there was no other Burlesque Festival happening in Oregon. Holly details all of the financial considerations and production logistics in producing a national Festival. She describes the many hours it takes to screen all the applicants to make the final selections of 22 performers for each night of the festival. She talks about hiring a Stage Manager and Kitten and hiring front of house staff. Holly did the painting and the artwork for the festival. For the first Festival, she and her partners put money in upfront and then hoped to recoup it. They then rolled forward whatever profits they had into producing the festival the next year. She talks about how difficult it was, and still is, to convince venues that having a Burlesque show would be good business.

Holly explains the process of traveling to perform at and participate in Burlesque festivals around the country. She describes her process for creating a new piece of Burlesque to perform. She confesses to being very costume-driven in her decision-making. She notes that many performers are music-driven, but for her costume often comes first in the artistic process. She says she enjoys putting a lot of humor in her routines. For example, she just created an I Love Lucy act and she also has an act to the song Lime In The Coconut. She explains that she loves the Tiki dances and costumes because it has a sunny escapist vibe for people who live in the rainy Pacific Northwest. However, she goes on to caution against cultural appropriation. She believes that you should be educated on all the colonialization that goes along with Tiki culture. She differentiates between cultural appreciation versus cultural appropriation.

On the topic of diversity in Burlesque, she notes that Portland is not very diverse racially. She explains that when she produces a show she makes a point of having a diverse cast in terms of race, physicality, and style. She cites as an example that the logo for the Oregon Burlesque Festival is of three women who are purple, pink, and blue. She didn’t want a white woman to represent the logo of the festival.

In terms of Burlesque empowering people, Holly doesn’t think Burlesque should be the performers’ therapy. She believes Burlesque performance should be about entertaining the audience. She affirms that being on stage and stripping in performance can be a defiant moment of “I can do whatever I want.” She feels that performing Burlesque and watching Burlesque can create social change.

Holly observes that two challenges facing Burlesque today are, 1. Over saturation and 2. The need to develop audiences. She notes that television and movie theaters were contributing factors in killing Burlesque in the first place in the mid-20th century. Because of that, she tends to keep her performance content off social media and sites like YouTube. She loves the live-performance aspect of Burlesque, and believes that watching something live makes you feel like you’re a part of something versus when you’re just watching on a screen. She loves the interaction with the audience in the shared human experience.