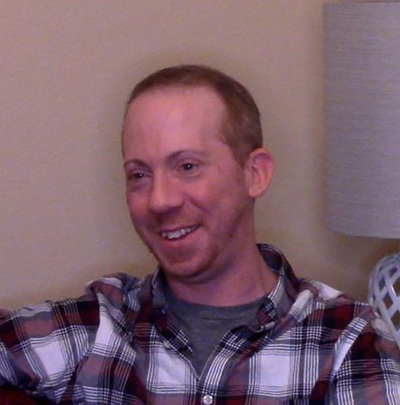 Christopher Stewart introduces himself as a Burlesque producer and performer. He performs as Zora Phoenix, a gender illusionist and as Sean Nannigans, a Boylesque performer. He has been part of the Burlesque and performing arts community in Portland and beyond for 22 years.

Chris was born and raised near Louisville, Kentucky. He spent about 3 ½ years in Southern California before moving to Portland in 2007. He credits moving to Southern California with opening his eyes to other cultures and other art, and moving to Portland helped him become the person he is today. In his formative years, he was a professional square dancer, a professional clogger, and he taught Country Western line dance. The first time he sang on stage was at age 8. In high school, he was in the marching band and in the color guard. In Southern California, he discovered the art form of Drag performance.

Chris worked for 20 years in corporate marketing, network administration and as a digital media analyst. With no formal education, he gives credit for his success to his can-do, positive attitude and ability to figure things out and learn new skills. His analogy is “Well, I don’t know how to bake a pie, but I know how to make cookies. So let me try it!”

Chris details a week in his life as an entrepreneurial creative artist, producing shows and performing. He describes his full-time work as the events coordinator and promotions manager of a popular Portland bar. He is also the Executive Director of the Rose City School of Burlesque, where he teaches 70% of the classes. In sum, he teaches people how to do Burlesque, he produces shows on stage, he performs, is the events manager at the bar, and is involved with several ad hoc and quarterly productions. He runs a small consulting and graphic design company and manages several performers’ social media, helping them with promotional information.

In describing the Burlesque community in Portland, Chris celebrates how performers are taking the art form into their own hands and producing their own shows, which has resulted in an explosion of diverse styles of shows and different art, without needing to adhere to the previous expectations and power structures in the community. While he is among four male-identified producers in town, he feels it is overwhelmingly femme-identified producers and emcees who are creating performance opportunities. He confesses he made a conscious decision to make his Burlesque persona a gender illusionist, for the primary reason that he did not want to be another dude on stage announcing women performers.

At the Rose City School of Burlesque, Chris began as a teacher of comedy and drama. Then he took over some of the admin for the school. He took over the school in 2012 as Executive Director, and still teaches 70% of the classes. The Rose City School of Burlesque has a Neo-Burlesque focus. Chris’s teaching philosophy focuses on the art form as an opportunity for personal growth that Burlesque provides. He teaches people how to own their space in the world and how it okay to be who they are. He also believes that anyone can dance, that there are so many ways of movement.

Describing the difference between Classic Burlesque and neo-Burlesque, Chris says that a lot of Classic act focus on the song and the rhythm and applying movement to that. With Neo-Burlesque, it’s often about finding the political statement first, finding a song that goes with it, and then creating the costume and movement that goes around that.

Chris feels that the Burlesque audience has changed quite a bit over the last decade. Starting in 2008, they had to educate people in the difference between club stripping and Burlesque. Now, the audience tends to be in the 25 to 35-year-old age group, but quite a few are in the 40 to 65 age group. At the beginning of each of his shows, he always asks how many people in the audience have never been to a Burlesque show before, and often it’s 40 to 60% of the audience, every show. He feel that Burlesque has grown and become part of the performing arts community in Portland because it’s good entertainment and the audience get an in-the-moment connection with performers and other audience members.

Chris describes his process for creating a new piece of Burlesque to perform. Often he is inspired by the music, and imagining the fluid movement of instruments in the song, and wondering how that combine with movement. He describes his process, citing some acts that he has made. Typically if the routine includes a considerable amount of striptease, it’s easier for Chris to do that as his Boylesque character, Sean Nannigans. For acts with singing, Chris usually leaves those to his gender illusionist persona, Zora Phoenix.

When teaching his students about the topic of cultural appropriation, Chris encourages performers to ask themselves why they feel inspired by a piece of music, art, or costume piece. Determining why you’re doing something and making sure that you’re not plagiarizing and not cloning is important. As a producer, Chris is very careful to be supportive of diversity, without tokenization. Rather than checking a box in casting for each show, Chris looks at the arc of his casting over a three-month period to see what the trend is, to ensure diversity in the shows he produces.

Chris firmly believes that Burlesque can be a force for social change. He believes that loving yourself is inherently an act of rebellion and that you create a political statement simply by getting on page and having society’s eye literally on your body. He credits Burlesque with bringing awareness and change around a lot of topics in society.

Chris shares the exhausting frustrations that Burlesque performers experience in the social media marketplace. He cites many instances of censorship and regulations against strippers and Burlesque performers. He describes the struggle of discussing his work and his art with family and friends who do not understand what Burlesque is about. Chris feels that the general public thinks they know what Burlesque is because of movies or depictions in popular culture, which are generally not accurate. Chris explained that a primary struggle at this moment is how to reach new audience members and grow the audience.

Chris wishes the general public understood that Burlesque performers are rarely on stage to make others feel that they, the performer, are sexy. Performers do it for themselves, or for a cause, or to tell a story. He feels that Burlesque is a performative theatrical art form, it’s transformative, and is a collective experience between performer and audience. He wishes people would put their preconceived notions or prejudices aside and come experience Burlesque.