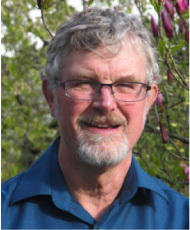 In this interview, Charles Goodrich explores his life as a gardener, writer, instructor, and family man. Goodrich begins by providing a glimpse of his upbringing and education before diving into his career as a gardener, first at Marylhurst Convent, and then later at the Benton County Courthouse, among other jobs. Goodrich then discusses the roots and evolution of his work as a poet and essayist, noting in particular the ways in which he was able to continue to write while maintaining a career as a gardener. In this, he touches upon the ways in which his family, his experiences, and nature have served as inspiration for much of his work.

From there, Goodrich elaborates on his decision to go back to school, how it led to a job at a local community college, and the avenues that it created for his writing outside of teaching. Of particular note are Goodrich’s recollections of his tenure as program administrator for OSU’s Spring Creek Project. The interview concludes with Goodrich’s thoughts on his longtime community of South Corvallis, Corvallis as a whole, and the future of Oregon State University.

Born in 1951, Charles Goodrich spent much of his youth on the move, attending twelve schools in twelve years before arriving in Tiffin, Ohio, to attend Heidelberg College. Goodrich graduated from Heidelberg in 1974 with a B.A. in Psychology and Minors in Math and Physics. Goodrich then found work as the groundskeeper at the Marylhurst Convent, taking on all required duties of the property. This introduction to professional gardening launched Goodrich’s career, and he spent the following twenty-four years filling various roles as a gardener, mostly in Corvallis, Oregon.

Over this period of time, gardening served as a source of income for Goodrich, but his true passion was writing, which he mostly pursued in private. This changed in 1999, when Goodrich self-published a chapbook titled Insects of South Corvallis, composed of a dozen short poems reflecting on his experiences with nature during his tenure as the Benton County Courthouse gardener. These poems earned Goodrich his first nod of public approval, as Garrison Kiellor read seven separate poems from the chapbook on his radio program, The Writers Almanac. In the years that followed, Goodrich released two more volumes of poetry - Going to Seed: Dispatches from the Garden and A Scripture of Crows – as well as a book of essays titled The Practice of Home, which reflects on Goodrich’s experiences of building his own house and raising a family in that space.

After a knee surgery forced him to pivot his career path, Goodrich elected to go back to school to pursue a Masters of Fine Arts at Oregon State University. After graduating from the program in 2002, he was hired at Linn-Benton Community College to serve as a part-time writing instructor. While working for LBCC, Goodrich became involved with the operations of the Spring Creek Project, an OSU humanities program devoted to the exploration of nature. Goodrich served as the Program Director from 2003-20011, before being promoted to the Director in 2011. In this capacity, Goodrich was responsible for developing and deploying a vision for the program. Retired from OSU in 2017, Goodrich currently resides in South Corvallis and is working on his first novel.