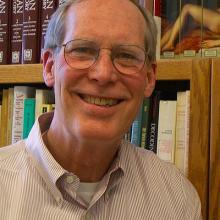 Bob Nye begins his interview by detailing his family history and background. He talks about growing up in Walnut Creek, California, and the various influences he had in his youth that lead to his lifelong love of studying history. He also discusses playing basketball, both in high school and college, and the experiences that came from it. Nye attended San Jose State University for his undergraduate degree in history, and he details his time in college, especially playing basketball and meeting sociologist Harry Edwards. He then transitions into a discussion of obtaining his master's degree from the University of Wisconsin-Madison, the extreme rigor involved, and his decision to pursue a Ph.D. From there he comments on his experience pursuing his doctorate, the threat of a draft notice hanging over his shoulders as he did so.

Next, Nye tells the story of meeting his wife, Mary Jo, at the University of Wisconsin-Madison as a graduate student, and outlines the beginnings of her career path. In this, he recalls that the newlywed couple visited France for research in 1968, which became an annual summer research trip. Following that, Nye addresses his decision to accept a teaching position at the University of Oklahoma, and reflects on the environment and events that defined the university during the first few years of his tenure. He comments on the evolution of his and Mary Jo's careers at the University of Oklahoma, and how they balanced work with raising a young daughter. He also describes the research subjects that he was interested in during this time, including the history of the social sciences in Europe as well as the beginnings of his study of the history of sexuality.

Nye then transitions into his and Mary Jo's move to Oregon State University, recounting the activities in which they engaged as endowed professors. He likewise recalls his work editing a book about the history of sexuality and shares more about the field, before bringing up his interest in the history of medicine and society. Nye also reflects on the extent to which he and his wife have put extra effort into mentoring promising students. The interview concludes with a discussion of Nye's love for Corvallis and his opinions on the direction that Oregon State University is heading.

Robert Nye was born in Concord, California in 1942. He spent the first four years of his life in Berkeley, where his father worked, before moving to Walnut Creek, California. Throughout high school, Nye was deeply dedicated to his studies. In his senior year of high school, he took a world history class that deeply intrigued him, and he went on to study history as an undergraduate at San Jose State University. Nye played basketball for San Jose State the first two years of his college career, and in this time, he met and became friends with sociologist and civil rights activist Harry Edwards.

In college, Nye began to gravitate towards the study of early modern European history. He attended graduate school at the University of Wisconsin-Madison, from which he graduated in 1965 with a master's degree and, in 1969, a Ph.D. For his dissertation, he wrote on the origins of crowd psychology and Gustave LeBon. He also met Mary Jo Mann while studying at Madison, and they married in February of 1968. A prolific and accomplished scholar of 19th and 20th century history of science in Europe and the U.S., Mary Jo Nye received the Sarton Medal, the highest award granted by the History of Science Society, in 2006.

Following his graduation, Bob began teaching at the University of Oklahoma, and remained there for twenty-five years. It was during this time that he published "Crime, Madness and Politics in Modern France: The Medical Concept of National Decline" (1984) and "Masculinity and Male Codes of Honor in Modern France" (1993). While at Oklahoma, Nye also began to cultivate an interest in the history of sexuality, and he later edited a reader on the topic that appeared in 1999.

In 1994, both Bob and Mary Jo Nye were hired to the History of Science faculty at Oregon State University, sharing the Thomas Hart and Mary Jones Horning Professorship of the Humanities for their entire tenure. Bob Nye retired in 2007 and Mary Jo followed suit in 2008.