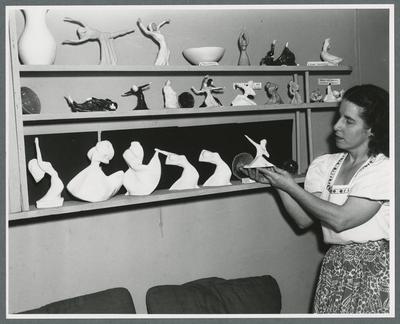 Retired professor of dance Betty Lynd Thompson describes her youth and the beginnings of her interest in dance. She also details the lives of her parents and their interests, before talking about where she attended university and obtained her Master's degree. From there she talks about beginning her teaching career at OSC after obtaining her Master's degree, working in the brand new Women's Building, and noting that she didn't have a single male student until the end of her forty-seven year career. She likewise mentions colleagues that she worked with as a dance instructor, speaking highly of Helen Poling and Ruth Glassow. She also recounts fond memories of studying at Bennington College under the instruction of Mary Wigman and Hanya Holm.

Next, Thompson describes classes that she took under Martha Graham at Bennington College and tells a story about bringing Graham to perform in Corvallis in 1940. Later, she discusses why she chose to write a book on dance instruction, and the impact that it had in the world of dance. She mentions faculty in the physical education department at OSC during the 1940s, including Eva M. Seen, recalls putting on dance programs for servicemen during the war, and discusses her Orchesis honorary dance group at OSC. She then talks about changes she saw at OSU over her career, recalling the reactions that she received in teaching modern dance, and noting that students would often take dance classes just for credit and not for genuine interest.

From there, Thompson talks about performances that were put on by the dance department for Mother's Weekend. She reminisces about prominent students and the costumes they used for dance performances and reflects on the evolution of the dances she taught. She then shares stories from her personal life, explaining why she never married and sharing a little about the animals that she has cared for throughout her life. She likewise discusses the manuals and brochures that she wrote to promote everyday fitness, and talks about classes that she taught for senior citizens after her retirement. She concludes with more memories from Bennington College, where she took classes under famous dancers Mary Wigman, Hanya Holm, and Jose Limon.