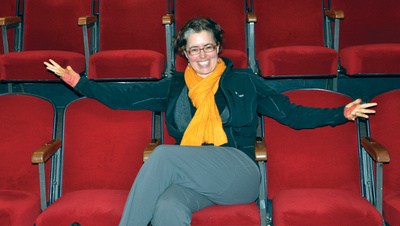 Sacha Reich is the founder of the Jewish Theatre Collaborative (JTC). She is currently the executive director. She has directed plays for both the JTC and Milagro, and continues to work in theatre arts.

Reich begins the interview by introducing herself and explains how she became associated with Milagro. She explains that her own theater company, which is in residency at Milagro, is embarking on its third season of producing work. Sacha says that Milagro has provided her theatre with a home and mentions that finding theater space in Portland is difficult. She goes on to talk about her time as a director for Milagro and doing other work with them. She continues by discussing the importance of relationships in theater arts and how much Milagro embraces those relationships.

Sacha next discusses how Milagro works and how it is different from other companies. She talks in depth about the inclusion and collaborative work found in Milagro’s productions. She also talks about the way in which Milagro has trained its actors and built the community’s capacity to tell the stories they create. What is more, Sacha explains the difference Milagro has made and how its focus is not about getting more people to go watch their plays or increase the demographic of audience members, but to change the community. Sacha proceeds to talk about the miracle of Milagro, saying that it is a miracle that it has lasted over 20 years, especially in a town where it is hard for theatre arts to get funding. To conclude, Sacha explains what she considers to be the ethos of Milagro and what she has experienced during her time there.