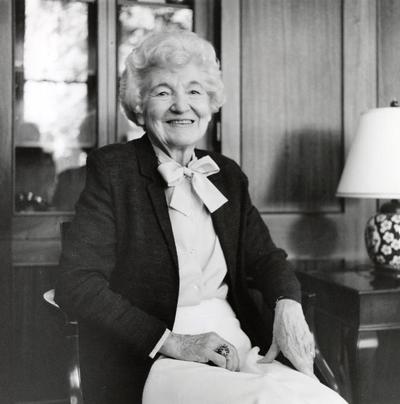 In this interview, Taskerud recalls her experiences as a young adult attending college during the Great Depression and working in various home economics jobs during World War II and in the following years. She opens with an anecdote about how she decided in eighth grade that she wanted to be a teacher, and at age eighteen, fresh out of high school, she got her teaching certification. She began attending South Dakota State University but was forced to drop out for financial reasons as a result of the Great Depression. She taught fourth grade for two years and then was able to return to school to finish her bachelor’s degree. Taskerud describes working several jobs during the Depression years, including working for Montgomery Ward, teaching fifth grade, and working for the Extension Service. She later attended Columbia University for graduate work.

Taskerud arrived in Oregon in November 1947. She describes Corvallis, Oregon as a rural farm town with a population of about 14,000 people. While living in Corvallis, she traveled across Oregon for her job as a 4-H home agent. She describes her experiences as a home economics professional teaching homemaking skills in various communities, including instructing women on how to use certain food products to create homemade cosmetics. Taskerud also lists several positions that she held while employed by the 4-H Club. After her retirement she was involved with several organizations such as the Phone Home Board and the Symphony Society. She also notes her enjoyment of making crafts and listening to music. As the interview concludes, Taskerud recalls her receipt of an Honorary Doctorate from South Dakota State University in 1962.