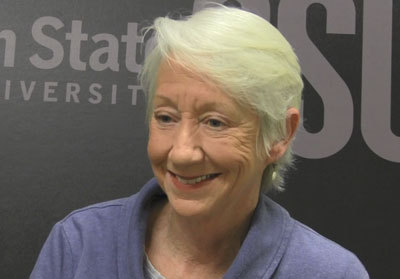 Dwire talks extensively about her childhood and her parents’ alcohol addiction. She explains how much of her childhood was spent taking care of her younger siblings in a disorganized--and often chaotic--house. Dwire also recalls how the Irish Catholic Church failed to support her parents with their alcoholism, though it was such a big part of her family’s life. Dwire discusses her college experience of studying dramatic arts while working in food services and sometimes taking care of younger siblings. She also shares her experiences working as a manager in food service and how it took her to the University of Hawaii and later the University of Hawaii, Hilo. She then discusses her move back to the mainland and how she ended up living in Corvallis. Dwire also describes her current non-traditional family in depth. She explains how after her childhood, Dwire never considered having children and as a result, did not get married until she was in her fifties.

Dwire then discusses her career at OSU as the Dining Operations Manager at Marketplace West. Her daily responsibilities and support she receives from her college are mentioned. She illustrates her interests outside of work, which include theater and politics. Dwire then shares her general experiences as a woman in the food industry as well as her personal experiences with harassment and discrimination. She finally covers her personal battles with addiction and how she was able to overcome them.