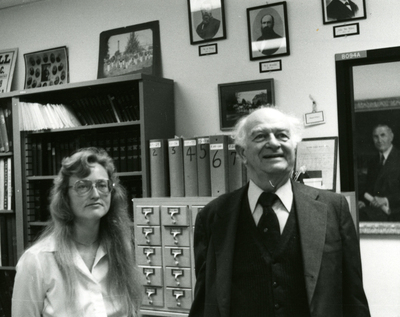 Linus Pauling was born in Portland, OR in 1901. His father died when he was nine, and from then on, the family’s finances were supported through room and board and odd jobs. Pauling attended Washington High School for three years and then moved down to Corvallis to study at Oregon Agricultural College in 1917.

Science caught Pauling’s attention early in life. He spoke about his childhood interests, and his passion for science stayed with him throughout his college career. At college, he studied chemical engineering and developed his interest in chemical bonds. In 1922 he attended grad school at Cal Tech, began his research in X-ray diffraction, and went on to become the head of the Chemistry Division there. Pauling was awarded a Nobel Prize in Chemistry in 1954 and Nobel Peace Prize in 1963. His other interests included nuclear disarmament, and later on, medicine and the benefits of Vitamin C.